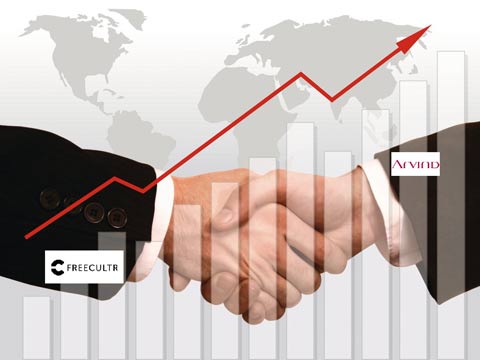 Retail conglomerate Arvind is in advanced talks to acquire Sequoia Capital-backed T-shirt portal Freecultr. According to reports, Freecultr will be acquired by Arvind Internet - the online arm of retail conglomerate that is spearheaded by Kulin Lalbhai, son of Chairman Sanjay Lalbhai.

While the officials of Arvind are tightlipped over the development, Sandeep Singh, cofounder of Freecultr, called it ‘speculative’.

Started as an online fashion brand in 2011, Freecultr has of late launched a new digital crowdsourcing platform, Freecultr Express that allows anyone to create and sell T-shirts through their tee-stores on the company's sites without any investments in inventory, operations or logistics.

This format is based on commission sharing on sales. According to the online portal, more than 5,500 individuals have used the platform to create more than 24,000 designs.

The portal also operates nine brick-and-mortar stores, including ones in NCR, Mumbai, Dehradun, Lucknow and Bengaluru. In 2011, Freecultr raised $4 million from Sequoia. In the following year, it got another $9 million from Sequoia and Moscow-based venture firm Ru-net.

If the deal goes through, Arvind will become the latest among a host of offline retailers including the Future Group and Mahindra Group to acquire struggling online players.

Arvind has many brands of its own, such as Flying Machine and Excalibur, and also sells global labels including Gap, Tommy Hilfiger, Calvin Klein, US Polo Association, Gant, The Children's Place and Aeropostale.