Titan, Montblanc JV to open have 50 stores in 5 years

Collaborations
Titan, Montblanc JV to open have 50 stores in 5 years 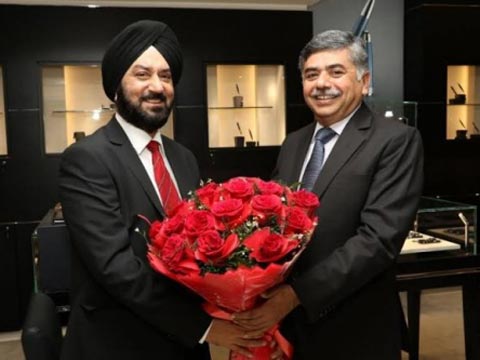 Indian designer and manufacturer of watches, jewelery and other accessories, Titan and global luxury firm Maison Montblanc, which have signed a JV to open retail stores in India aims at investing around 250 cr for the coming five year to open up 50 store in the country.
Commenting on the same, Bhaskar Bhat, MD, Titan said, “We would have around 50 luxury boutiques by 2020-21 in 40 towns which include eight cities and tier II towns.”
“The JV is investing around Rs 5 crore in one store,” he added.
“In top eight cities we would probably have 15 to 20 stores for the JV and there is simultaneous demand in tier II places as well. The plan is to first establish in the first eight cities,” Bhat said.
The JV has recently opened its third store in New Delhi. The two other stores are in Mumbai and Pune and three new store launches are scheduled by the end of this fiscal.
The boutique sells writing instruments priced between Rs 22,000 and Rs 6.50 lakh and watches ranging between Rs 1.15 lakh and Rs 7.50 lakh along with jewellery, leather products and travel bags.
"Montblanc brand has big potential as Indians are now getting used to luxury," Bhat said.The JV is also aiming tier II and III cities such as Chandigarh, Surat, Kochi, Jaipur, Bhopal, Indore, Lucknow and Patna.