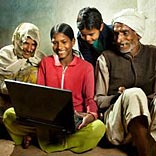 Bharat has always dominated over India when it comes to growth of various industries in the country. This time Bharat, which resides in cities beyond the metros, has now transformed the way it shops, as it goes online. The e-retail arena of the Indian market is seeing an enormous boost in terms of buying patterns from the non-urban areas. Almost every e-retailer, on an average, is seeing a contribution of 45 per cent in terms of visitors from non-urban areas, a number which was nearly half same time last year.

According to a report by Franchise India, Indian eRetail Report 2012, the Indian online retail industry is slated to touch Rs 7,000 crore milestone by mid 2012. Though, the report points out that the growth is driven by the need to save time in the urban India, about 50-53 per cent of the demand comes from tier II and III towns.

The e-retailers have given people in non-urban areas, freedom to shop. The consumers now have a wider access to brands which are not yet accessible to them through physical stores. E-retail is getting the penetration which physical retailers haven’t yet achieved. These cities are now well equipped with internet services and have the spending power as well.

“With the proliferation of internet usage in Tier II and Tier III cities in India, several small towns and cities have become the new emerging hubs of e-commerce. Big brands don't find it viable to open shop in small towns and an online shopping portal like ours is the perfect route to deliver their products to those customers in non metros who can afford them,” says, Aasheesh Mediratta, Director - Sales, Fashionandyou.com.

Moreover, apart from accessibility and spending power, people are now having a trust factor in the online retailers. According to Ranjith Boyanapalli, CEO, Buytheprice.com, “The consumers in non-urban areas are buying online with a completely different mindset. Their purchases are more need based. For instance, someone in non-urban areas would buy a low-end phone which is his/her need, but a consumer in urban area would buy it for different reasons including less time availability, experimental or completely impulse based.”

For a consumer in non-urban areas, it’s not the deals that drive the demand; it’s the need that drives the demand.

Numbers have been booming in the e-retail arena, as the industry sees huge number of visitors and sales, with the kind of reach it ensures. Though initial growth has been accelerated by the Indian urban dwellers that have gone crazy over shopping online, the present numbers see almost equal representation from the non-urban areas.

For e-retailers, of the total number of visitors everyday, 40-45 per cent are from non-urban areas. Of this nearly 1-2 per cent are converted into concrete buys.

Bharat, in terms of e-retail, is making greater purchases in almost every region if the country. “We have seen an insurgence of purchases happening from cities like Surat and Bhavnagar in Gujarat, while cities like Bhatinda and Pathankot are picking up in Punjab. If we go down South cities like Trichy and Vizianagaram has shown immense growth,” informs Sandeep Komaravelly, VP- Marketing, Snapdeal.com.

For buytheprice.com, cities in North and South of India have emerged strongly.

“Several small towns and cities have become the hub of e-commerce in India. Chandigarh, Coimbatore, Vadodara, Goa, Jamshedpur from the North, South, East and West respectively are the top Tier II cities that have picked up immensely when it comes to buying online. Majority of the business still coming from Delhi NCR, Bangalore, Mumbai & Chennai,” says Mediratta.

A step towards brighter future

What will make this scenario even brighter are strong logistics, marketing and promotional strategies specifically targeting the non-urban areas. The e-retailers are already making their logistics strong by partnering with leading logistics players in the market and further channelising with local service providers.

For marketing and promotions, print advertisement and social media visibility are the sought after ways of reaching out to people.

The future for e-retail in non-urban areas is bright with e-retailers expecting a rise in the sales coming in from these areas as trust grows stronger among consumers.


According to the eBay India Census Guide 2011, top ten non-metro cities that shop on eBay India are: