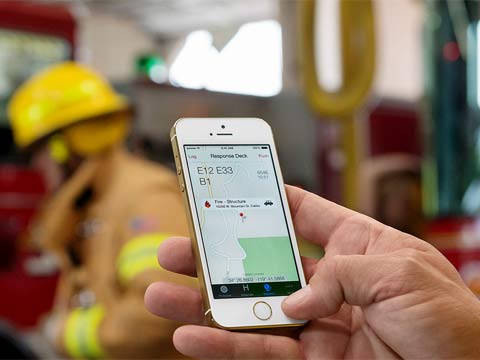 New Delhi: Technology major Apple is expected to unveil iPhone 6, a larger screen version of its popular phone series, along with its first smartwatch on September 9 in its hometown in Cupertino, California.

The launch, which is expected to feature a larger-screened iPhone, will be held in the same venue where Apple's late co-founder, Steve Jobs, unveiled the original Mac computer 30 years ago.

The Mac is credited to have changed the landscape for personal computing, taking technology to the masses.

The iconic creator of iPods and iPads has sent out a cryptic invite, in its usual style, saying, "Wish we could say more."

The invitation comes on a simple black-and-white background dominated by the company's corporate logo.

These events have become sort of an annual ritual since 2007, when the company launched the first iPhone and later the iPad as well.

According to various reports, the new iPhone may come in two variants - one one with 4.7-inch and the other with a 5.5-inch screen to compete with large screen smartphones made by Korean rival Samsung and others, which are powered by the Android operating system.

Apple enthusiasts are also keenly awaiting the launch of Apple's smartwatch, which is expected to make its debut at the event.

A smartwatch or other wearable technology would mark Apple's foray into the segment, where Samsung has a major presence.

Though Apple CEO Tim Cook has indicated that wearable technology devices are exciting, the company so far has not provided any concrete plans on what the company is working on.

Reports also say that the tech giant has obtained the trademark for the name 'iWatch' in several countries and has also hired top talent from the world of fashion, including the former CEOs of Yves Saint Laurent and Burberry to offer stylish designs.