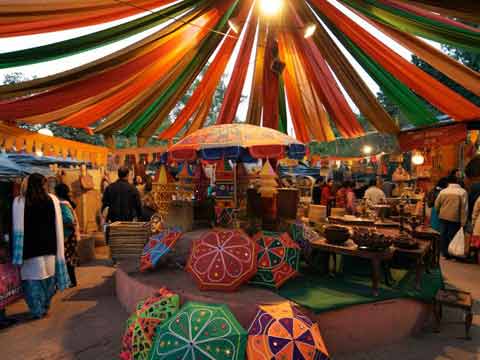 The Indian Handicraft industry’s contribution in generating employment to a huge number of artisans’- generation after generation cannot be underestimated. The Indian handicrafts industry is fragmented, with more than 7 million regional artisans and more than 67,000 exporters/export houses promoting regional art and craftsmanship in the domestic and global markets. In 2014–15, Indian handicrafts exports stood at US$ 4.5 billion, up approximately 15.4 per cent over the previous year’s exports.

However, this priceless jewel of our heritage is clouded with inadequate advertising and publicity, faulty policies, un-remunerative and baseless pricing, exploitation by middlemen and untapped zones and similar threats. The threats that this age-old craft are facing today need to be overcome with policies and practices initiated by the Government and the citizens of this country alike. Few challenges that the industry faces today can be summed up as under –

Erratic Government Policy
The government has somehow not managed to provide an environment and physical infrastructure favourable for the growth of the industry. Consequently, the mass import of mediocre goods from China has resulted in a virtual swamp of the market by Chinese goods. Moreover, these goods are not only sub-standard most of the times, but are also non-biodegradable which makes them environmentally unfriendly. Therefore, the government needs to do more in terms of regulatory provisions to promote small scale enterprises and in terms of availability of infrastructure. It also needs to create disincentives and enforce them for dumping of goods by other countries.

Poor Marketing Strategies
Marketing strategies are an important factor for the success of rural artisans. These strategies are crucial because it is related to other elements, such as pricing and resulting profits. One way in which this can be implemented with immediate effect is the use of personal recommendation which is used to promote products. Companies should be enabled to promote and sell Indian handicrafts to local as well as International buyers. India needs to develop this into an organized sector to be able to deliver this craft to right people.

Lack of Training and awareness in Artisans
Indian handicrafts, no doubt is, unique in itself, but the makers keep on making the same age old pattern which does not attract consumers. This is because there isn’t a way to bring these artisans and craftsmen up the curve. Low literacy and education levels add to the inability of artisans to access resources from modern sectors. Institutes should come forward to encourage this craft by taking an active participation in the training and development of the artisans and teach them newer and better ways of making their products by giving them a more contemporary touch. A differential strategy rather than a focused one will help the existing situation.

Un-defined wage structure
Since most of the artisans in the Indian handicraft industry belong to the economically backward classes of the society, financially sponsoring entrepreneurial projects, large or small& paying attention to developmental needs of the community remains a major concern. Such an unorganized manner of working has resulted in a low wage system which leaves absolutely no scope for training & development of the artisans. This leads to a shortage of skilled workforce in many cases. The objective of converting artisans to self-sustained community based entrepreneurs need to be achieved to overcome this challenge.

Poor technological know-how
It has been found that a major reason of the popularity of Chinese products in India is credited to large scale machine-made production of the Chinese goods. Indian products are completely hand-made because the Indian artisan is unaware about new technologies and modern industry trends. This coupled with lack of proper infrastructure facilities in India affect the production & marketing in this sector.

Lack of financial and credit facilities
Due to low wages and lack of financial and other credit facilities along with uncertainty of workload throughout the year the artisans are incapable of sustaining a basic lifestyle and hence look for alternate occupation. This makes them difficult to preserve and pass on this art to the next generation as due to financial pressures, the children of the craftsmen have to take up other ill paying jobs, while giving up on their traditional occupation, leading to further deterioration of the craft. This is the time for the Govt. to explore public private partnership models to bring about greater efficiencies in this sector. Such an initiative will promote sustained growth of the handicraft clusters and sustained earnings for the artisans.

To sum it up, an entire cleansing and shuffling of the process is necessary. Policies need to be streamlined and outdated regulations should be amended. Only then will we be able to sustain and enliven this primitive but beautiful craft of our country.