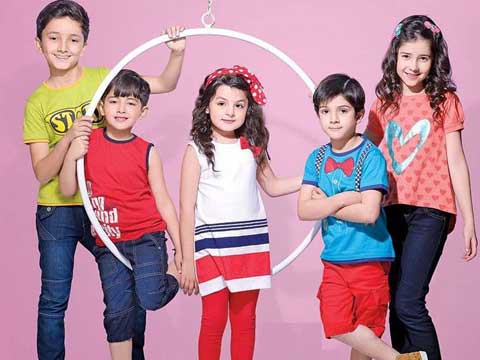 Designer clothing for children has been around since Christian Dior started making it in the 60’s. However, in India, luxury kids lines has surged in recent years. The market for children’s fashion and luxury is fast becoming one of the most profitable retail segments in India. Many global brands are exploring growth opportunities in emerging markets as economic growth and birth rates slow in western markets, and India is seen as a high-potential market. The fact that India is one of the youngest nations in the world with 29 per cent of its 1.2 billion population being under 14 years, according to the World Bank—makes it an attractive market for brands. For the US, Europe and Japan shares of children in their population are 19 per cent, 16 per cent and 13 per cent, respectively.

Among the emerging economies, India has the distinct advantage of being a country with promising economic outlook coupled with growing kids population and increasing discretionary spending on kids. Talking about facts, in 2015, the retail value of the kids apparel market in India was pegged at Rs. 79,000 crore, according to industry estimates. A large portion of the demand has been driven by Indian consumers shifting to the organized market. According to a March 2016 category briefing by Euromonitor International, spends on branded children wear products are on the rise in urban centres in India with kidswear expected to reach sales of Rs 1.6 trillion by 2020.

All children are extensions of their parents and want to wear what their father is wearing. Luxury labels like Gucci, Burberry, Armani, Little Marc Jacobs and premium brands like Hugo Boss, Karl Lagerfeld, Carrement Beau and among others see value in bringing kidswear to India.

The market for kids' apparel in India exceeds Rs. 13000 crore, of which around Rs. 3000 crore is constituted by branded kids' wear. The kids' wear market is growing at the rate of 10 per cent per annum, which makes it one of the fastest growing markets.

Some major changes in trends are taking place in the market for kids' apparel. One of the important changes is the increasing preference for branded apparel. This shift is taking place on account of changes such as a rise in the disposable income of the people and the increasing influence of foreign culture. The other important change that is taking place in this area is the emergence of kids as an independent buyer group. Influenced by mass media and peer pressure, today's kids are more informed and self-conscious. Indians are increasingly spending more than they ever have on clothes for children. Infact, Indian and Chinese mums are the only ones, globally, willing to stretch their budget to buy branded products for their children.

Earlier, kids’ wear market in particular had been dominated by non-branded players since parents did not believe in investing in kids’ clothing. But those days are passé with global brands like, Pepe, Gap, Benneton, Tommy Hilfiger, Pony, Pima and Reebok and designer labels vying for space.

A study by industry body Assocham has estimated that kidswear market in the country will be worth Rs 95,000 crore by 2016, growing at a compound annual growth rate of about 20 per cent. Kids today are also becoming brand conscious and have their own preferences while the parents are ready to shell out money; probably it is the feeling that they couldn't do it so they want it for their kids.

Children's apparel is a growing market in India that has huge untapped potential. Apparel makers all over India are making forays into this huge market, in an attempt to make favorable use of the prevailing trends. They are also coming up with collections that would create new trends.