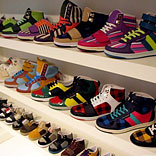 According to a recent report by ASSOCHAM, the Indian footwear industry is growing at a compound annual growth rate (CAGR) of about 15 per cent and will reach about Rs 38,700 crore by 2015 from the current level of about Rs 22,000 crore. The report titled, ‘Indian Footwear Industry: An Analysis’, states that India produces nearly 300 crore pairs of footwear annually, exports over 10 per cent and accounts for about 15 per cent of annual global footwear production, which is over 2,000 crore.

“The domestic footwear market is driven by growing fashion consciousness together with increased disposable income among India’s urban middle class, which contributes about 45 per cent of overall footwear market making India the second largest global producer of footwear across varied segments after China,” said D S Rawat, Secretary General, ASSOCHAM.
“Low cost of production, abundant availability of raw material, ever-evolving retail ecosystem, buying patterns and a huge consumption market are certain basic features that set apart the Indian footwear market,” said Rawat.
Per capita consumption of shoes in India (number of footwear worn by an individual) is currently about 2.5 shoes per year, said the study. The Indian footwear market is dominated by men’s segment, which accounts for about 55 per cent, followed by ladies’ and kids’ segments, which account for about 30 per cent and 15 per cent respectively.
Stay on top – Get the daily news from Indian Retailer in your inbox
Also Worth Reading
Explore By Industry