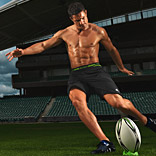 The men’s innerwear market, in India, is increasing its base size at a promising rate. With the middle and premium men’s innerwear segment market size around Rs 2500 crore and the growth rate of around 35-37 per cent, the brands, national and international, are poised to make their presence strong and inevitable. Insiders say Rupa ranks top followed by Lux; and then Dollar takes the third position in the men’s segment.

With organised retail gaining momentum in the burgeoning economy of India, giving customers wide range of choices in almost every product, men have also come out of the cocoon of comfortability to catch up with stylish briefs and vests.

Innerwear brands are coming up with innovations in fabrics, prints, and cutting-edge designs to entice men. Companies like Dollar Club, Rupa, Amul macho, Lux Cozy, Crusoe, Hanes,  Jockey, Calvein Klein, and Dixcy Scott, etc are already present in the Indian market with their exotic and stellar style to lure the Indian men.

The discerning consumer has become more fashion conscious, leaving the era of ‘purely functional- based purchase’ and has moved towards self indulgence; thanks to companies coming out with designer wears and retail stores which have become more consumer friendly creating the ambience to encourage fantasy- and desire- based purchases. Apart from the exclusive services, the disposable income of the educated class has driven the impressive growth for the category.

Trends in the men’s innerwear

Reversing to the era of medieval period where men wore the fancier finery, with bright colours, embroideries, fancy prints and even laces most of the time, than women did. Bright silk tights with laces were considered as an expression of masculinity. The medieval fashion is back!

Catering to the needs of ‘Styling’, brands are focusing on the youth generation. As stated by the Nischal Puri, CEO Forbes Brands, “ Today’s brief market has at least three conscious trends namely snugar (body hugging), upsurge which include string bikini and trunks; and last but not the least, comfort is given for fashion.”

‘Trend in Men’s inners’ for Dollar Club team is in fabrics. When asked about the prevailing trend pattern in the innerwear industry, Vinod Gupta, MD, Dollar Club asserts, “Men’s Underwear fabrics come in huge range such as cotton and polyester but soon the latest fad could be silk blends. Who knows!” He further opines that the company is also on the verge of launching designer wears with imported fabrics.

The brands have nationwide network and distributor to reach the target customer. Along with it, the companies even take the innovative mediums like publications, city supplements, some specific youth centric magazines, lots of in-store displays, hoardings, advertisements through TV Channels etc to bring up the brand visibility.

This market is generally spread through MBOs, shop-in-shop, franchising distributive polices targeting all sections of the men’s categories. The market is still in dearth with its exclusive outlets.

Puri brings to the light the successful distribution networking of Forbes Brands. He states, “We have made our presence felt in almost 22 cities through 26 distributors in just 2.5 months.”

The company Dollar Club is already in partnership with German Retail giants, Carrefour and Lulus in the Gulf and is currently the highest selling innerwear brand in the UAE and the Middle East.

The brand ‘Dixcy’ believes strongly in in-shop branding where the company has around 700 distributors who further have 100 retailers each. Such a web scatters the product in every nook and cranny of the country. Along with it on marketing front, the brand has ‘Salman’ as their brand ambassador just like Dollar Club’s Akshay Kumar to increase the sales figures.

Most of the brands fetch the revenue from premium brand especially from metros. But some brands like Dixcy Scott has wide range to tap the revenue starting from premium to the labor category.

As opined by the spokesperson for Lux Cozy, “Since we target the mid price segment and the youth category, our financial position is excellent along with the promising growth at the rate of 35 per cent.”

“Men’s wear constitutes almost 78 per cent of the total revenue. We had a turnover of 290 crores last fiscal. We have set our targets to reach 500 crore in next three years aiming a growth of approximately 35 per cent year-on-year,” avers, Vinod Gupta, MD, Dollar Club.

Suiting every pocket, the price range of briefs and vests covers most ranks of the society.

Looking at the burgeoning economy of the country, few international brands like Jockey (early starters) have already made their niche in the market. Having confidence in the booming economy along with the demand for more branded innerwear in the market many companies are scouting to carve their niche or reinforce their position in the market, for instance brands like Calvein Klein, Fruit of the Loom, Lactose etc.

Gauging the total market worth of men’s inner wear as Rs 5000 crore, varied brands have already flooded the market with their versatile designs, colours and vibrant prints. However, the cut throat competition has just begun among the brands and the time is not far when the men’s innerwear market would supersede the women lingerie market in terms of designs and sales.  Only time would testify. Wait and watch!