Battle to be Numero Uno 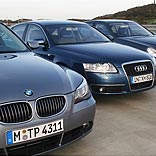 The stage is set, market is ripe, consumers and manufacturer are ready to go. This is how the current Indian luxury car market looks like. The heat in the market seems to be never ending as three players including Audi, BMW and Mercedes-Benz fight for the number one position.

The players are taking every step strategically to reach the spot, launching new models, targeting larger audience, special services, expanding network and strengthening after sales services. All these strategies are being well taken by consumers.

Luxury cars which were taken as dream cars a few years back are now becoming an everyday visual. They are not confined to minimal numbers, as a lot of cars one sees on roads are from the kitty of these three leading luxury brands.

Audi has fared as the highest gainer in the arena, setting its sight on becoming the No.2 in the market in 2012. It posted 43 per cent growth in sales for first half of 2012 with 4000 cars sold, the best runner being Audi Q3 with 500 bookings in 5 days. Last year it had sold 2802 cars in same period.

“2012 is emerging as the most successful year in the history of the brand, worldwide. Given our outstanding performance in the first six months of the year, we are right on track to achieve the sales target of 8000 cars by year end and consolidating our position in the market again as the fastest growing luxury brand. The launch of Audi Q3 was in line with our strategic course of product expansion in the market for sustainable and profitable growth. We achieved 500 bookings for the SUV within just 5 days of the launch, of which 200 deliveries have already been accomplished. Seeing the tremendous response to it, we have opened the next round of bookings for 500 Audi Q3s and expect the same enthusiasm from our customers”, said, Michael Perschke, Head, Audi India.

While for the same period, Mercedes-Benz posted a rise of 74.97 per cent to 2,922 units from 1,670 units in the same period last year. Mercedes Benz India sells C-Class, E-Class and S-Class sedans in India along with M-Class and GL sports utility vehicles.

BMW which released collaborated numbers for Asian markets saw flat sales growth in India. Sales were particularly positive in countries like India, Japan and China. Asian sales during the first seven months of the year increased by 25 per cent to 274,058 vehicles while sales in July 2012 increased by 20.8 per cent to 36,128 units. Sales of BMW 3 Series Long Wheelbase and BMW X1 are expected to contribute to major sales during the rest of the year. Sales of BMW motorcycles however were not as encouraging. During the first seven months of this year BMW Motorrad sales dipped by 3.2 per cent while sales in the month of July saw an 8.3 per cent fall.

The three players are leaving no stone unturned to leverage all its strength to get to its consumers. From campaigns to dealership and to launching new products, they are giving it all.

Mercedes-Benz on the other hand concentrated on giving state of the art after sales service workshop. It recently inaugurated its largest ever workshop in Mumbai, covering an area of 100,000 sq ft with 54 dedicated bays capable of servicing 60 cars each day. Talking about the workshop made with an investment of Rs 520 crore, Peter Honegg, Managing Director & CEO Mercedes-Benz India said, “I reiterate the fact that going forward, world-class servicing standards will be the key differentiator and Mercedes-Benz will continue to create new benchmark and take a lead. We have been focusing on strategically expanding our network in India and this new world-class workshop is yet another step to move closer to the customers”.

Audi has been going strong in terms of advertising; they have shifted their focus from mass media advertising to digital through social media, search engines and mobile marketing.

All the three players are aggressively launching new models targeted at the Indian consumers. Audi recently launched two models including Audi Q3 and Audi A8 L sedan. Of this Q3 has emerged one of the best taken models in the country with 500 bookings in 5 days of its launch.

Now the aim is to bring in more models in the range of Rs 25 lakh to Rs 30 lakh. While Mercedes is planning to bring in the B-Class, a compact sports tourer, and A-Class, a small family car to India; Audi will roll out the A3 hatchback; and BMW is developing an all-new platform for cheaper models.

Plans are many, strategies are right; all we have to see is who wins this battle.