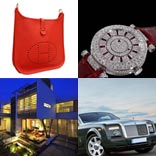 Economy slumping, drought, inflation, rising fuel prices and other dark clouds that are covering India have had an impact on the life of every Indian. Every India? No, not really!

These phenomenon have not really impacted every Indian, not the rising numbers of HNIs or the High Net worth Individuals at least. The Indian luxury retail arena seems to be enjoying their best times with sales rising and people asking for more.

Moreover, what’s amazing to see is that most of these ultra HNIs are non-inheritors, they are the new rich born out of the sudden boom in economy, new ventures and jobs in the technology and financial services, paying fat paychecks. The report suggests entrepreneurship is clearly the dominant source of domestic wealth, but fast-growing service industries such as technology and financial services have also catapulted many hitherto middle-income group individuals into the ultra high net worth individual (ultra HNI) bracket.

According to the report, Ultra HNIs spend around 22 per cent of their income on luxury items. Based on cultural traits, ultra HNHs in north India tend to be a bit more expansive with their money as compared to their counterparts, especially from the south.

Shane Choitramani, Managing Director, FX Entertainment says, “The HNIs who have so much of wealth are not really affected by the slowing economy, falling value of rupee and inflation. They are loyal towards the luxury brands of their choice. Also, if they want to have a particular brand they would buy it without any second thoughts. India has a huge potential in terms of luxury products. There is a growth of 25 per cent in the luxury market in India.” FX Entertainment is exclusive distributor of luxury hi fi audio brands like Triangle, Cambridge and others. Triangle has recently entered India under a strategic alliance with FX Entertainment and already targets to sell 7,000-8,000 units in the next five years.

Similarly, the luxury car market is growing rapidly in India. The super luxury automobile brands including Rolls-Royce, Lamborghini, Ferrari, Bugatti, Maserati and Porsche only see a rise in sales all the more faster.

The numbers are only going up, while Rolls Royce, a brand which offers cars starting from Rs 2.5 crore in India, seems to be running short of the number of cars allotted to India, on the other hand, Lamborghini sold 14 cars in 2011 and plans to sell another 18-20 in 2012.

Rolls Royce will be launching Phantom Series II next month which is expected to cost some Rs 4 crore in the country.

Also, we see there is a huge competition between high end brands including Audi, BMW and Mercedes. They all are aggressively competing in India with strong targets.

Moreover, in terms of fashion, the numbers don’t seem to stop as brands strategise more rigourously for India. According to a recent development, L Capital is in talks with India’s leading designers including Rohit Bal and Sabyasachi Mukherjee, to create an Indian luxury house. It is also in talks with specialist multi-designer retailer Evoluzione for the venture, which, while consolidating their separate labels under a single corporate structure, is aimed at giving each of them a serious shot at scaling up domestically and globally. The complete venture would see an investment of Rs 200 crore.

So, for the luxury retail arena it’s a win-win situation with buyers, brands and even investors all geared to flood the market.