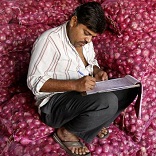 New Delhi: Cracking down further on hoarding, the Centre put onion and potato under purview of the Essential Commodities Act and imposed stock holding limits in a bid to improve availability and rein in prices.

The decision was taken at a meeting of the Cabinet Committee on Economic Affairs (CCEA), presided over by Prime Minister Narendra Modi, which also released additional 50 lakh tonnes of rice through PDS to give relief to poor.

Stock holding limits, which will be set by state governments, will prohibit individuals from storing onion and potato beyond the prescribed ceiling. The stock holding limits will be in operation for the next one year.

The CCEA has decided to bring onion and potato under the purview of the stock holding limits under the Essential Commodities Act, 1955. "With this, we are giving right to state governments to take stern action against hoarding and black marketing," Law Minister Ravi Shankar Prasad told reporters here.

A notification in this regard will be issued tomorrow.

Onion and potato were under the Essential Commodities Act during the period between 1999 and 2004.

Stating that there are complaints that prices are rising despite adequate supply in the country, Prasad said the CCEA discussed the emerging situation "seriously".

The CCEA also decided to release 5 million tonnes of additional rice to BPL and APL families through public distribution system (PDS) in those states where food security law is not implemented.

The additional rice, which will be over and above the normal PDS allocation, will be released from July to March.

"We have sufficient supply. There is no need to panic. We are taking all possible measures to improve supply and control prices," Prasad said, adding that the government was hopeful that the monsoon rain would improve from next week.