Retail & Business
KB: Will he or won't he 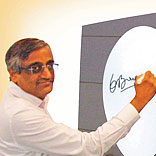 We have all read various stories about how the Retail King, Kishore Biyani, moved out of one of his first retail ventures Pantaloons. The debt ridden PRIL, now Future Retail India Limited, according to reports had also planned to do away with Big Bazaar and Food Bazaar. But now there is slight change in plan.

KB has reportedly said that he has no plans to sell off stake in Big Bazaar and Food Bazaar chains. The group is likely to have sorted out its debt crisis after three back-to-back deals in the past one month. According to Biyani, he doesn’t want to let go off his core retail business now. He has been stating this for a long time, but now that everybody knows the Pantaloons story, all this should be taken with a pinch of salt.

We have been hearing that Future Group has been in talks with Mukesh Ambani to sell stake in its flagship Big Bazaar, which contributes almost 65 per cent of revenues of Pantaloon Retail (India) Ltd, the listed entity of Future Group.

Moreover, reports also suggest, that Mitsubishi of Japan had also asked for a slice of Big Bazaar. The Japanese giant had made it a pre-condition to invest in Future Group’s food sourcing and back-end infrastructure. The two sides had discussed the issue in US, wherein, Mitsubishi suggested a convertible structure that would allow an equity exposure in Big Bazaar, as and when foreign direct investment was allowed in multi-brand retailing.

To follow all this, we shall witness the merging of 33-store, eZone electronics retail chain with InTarvo and subsequently bringing in PE partners in the combined entity. For Future Supply Chain, they plan to sell stake worth Rs 230 crore to new and existing investors.

With various deals, KB has been trying to cut off its debt. He has been able to take care of Rs 6,000 crore of it by now.

Now looking at various possibilities and also the going of Pantaloons of Future Capital, who knows what’s next on Biyani’s mind.