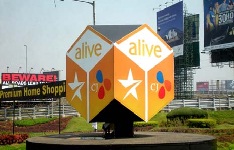 Mumbai: Leading home shopping network Star CJ said it plans to invest USD 1 million to launch a mobile application and a new warehouse with a view to tap the growing demand.

"By October, we will be establishing a mobile application. Secondly, we plan to have a warehouse in North-east by next year. It could be in Kolkata, but it is not fixed yet. We also have plans to have elaborate logistics process," Star CJ Network India chief executive Kenny Shin told PTI.

He said they plan to establish a warehouse managing system and envisage to invest USD 1 million in next one year.

The company was a 50:50 joint venture with Korea's CJ O Shopping, and media conglomerate Star, formed in 2009.

Star recently exited the business and sold its entire stake to Providence Equity for an undisclosed sum.

Shin said Star exited the JV as home shopping was not their core competency.

The company can use the name Star CJ for a year and he said they are working on a new name.

The home shop network market in India is projected to be between Rs 2,000- 2,500 crore, which is growing at 50 per cent annually in India and Star CJ enjoys 40 per cent share of it.

He did not divulge the revenue details but said TV home shopping dominates its revenue in India with nearly 95 per cent, while the internet business contributes 5 per cent of it.

"Our vision is to become the number 1 company in online shopping market by 2023. Within five years, we want to achieve USD 1 billion revenue here. We also plan to offer an IPO within a year's time," he added.