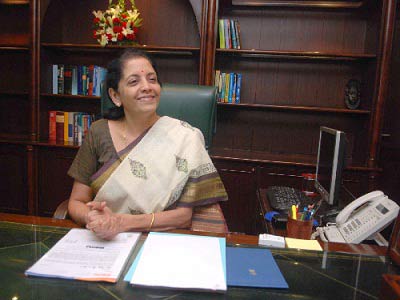 She said during Question Hour in Rajya Sabha that BJP got a massive mandate on the basis of its election manifesto which opposes FDI in multi-brand retail.

However, the government has not initiated any move to scrap the policy of allowing FDI in multi-brand retail approved by the previous UPA government.

"The mandate given to government is on the basis of our manifesto...we do not entertain FDI in multi-brand retail," she said.She said FDI flow have not been consistent in past few years.

FDI flow is dependent on the business environment and how decisions are made, she said, adding FDI inflow has been skewed in favour of Mauritius.

"We are using FIPB to carry out check (on investing companies)," she said.Even in sectors where FDI is allowed under automatic route, RBI scrutinises the funds flow, she said.

RBI and Department of Revenue through FIPB takes critical look at the kind of investment coming into India, she said.

"Under the liberalised economic environment, investment decisions of investors are based on the macro-economic policy framework, investment climate in the host country, investment policies of the trans-national corporations and other commercial considerations," the Minister said.

On the implementation of the controversial GAAR tax, which is to come into effect from next fiscal, Sitharaman said government is "working" on the issue and decision when taken will be informed to the House.

On steps taken to boost FDI, she said various set ups are in place to attract foreign investment.

These include five joint commissions with Hungary, Poland, Sweden, Belarus and Libya and CEOs form with nations like Japan, France, Russia, Malaysia and South Africa.

India has also signed BIPA with 83 countries and CEPA with 9 countries, she said.