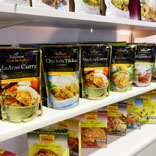 Life in today’s world is fast-paced and consumers are looking for quick eating options. With this growing demand, the Indian market has seen a strong insurgence of ready-to-eat food, which is fast gaining popularity among the masses. These products are being well marketed by companies that have been in the FMCG arena for years selling a wide variety of products, and also by companies, which have recently made their mark in the industry for ready-to-eat segment.

According to the report by Euromonitor International, a market research company, major social, economic and demographic changes over recent years have had great influence on the food Indian consumers eat, and on where, when and how they do so. As a result, the convenience food sector has grown by 70 per cent over the last decade, creating a huge market. Convenience foods are foods that are designed to save the consumer’s time in the kitchen and reduce costs due to spoilage. These foods require minimum preparation, typically just heating, and are packaged for a long shelf life with little loss of flavour and nutrients over time.

The RTE segment now occupies a decent portion of every household’s shopping basket. Consumers are always looking for a convenient source of food, as cooking has become more of a chore today. Moreover, with microwaves and ovens becoming a part of the Indian kitchens, consumers are not thinking twice before purchasing RTE products.

“RTE is growing in India. This product line was largely export driven, but rapid evolution of our society and economy is aiding the demand as well as the need for RTE products. Our young population, strong middle-class spending power, as well as the rise of dual income families are fuelling RTE sales. Diminishing culinary skills, as well as scarcity of domestic helps and cooks are other reasons why RTE products are needed,” says Sahil Gilani, Director, Gits Food Products Pvt Ltd.

Reaching out to consumers

The companies have been following various methods to popularise their range of RTE products. What has come across as the best way to get to consumers is launching products that are well suited to their taste buds.

The RTE arena has lately seen a wide array of variants being launched. Companies are launching foods, including snacks, lentils, dishes and even combo meals. Along with bringing in mass popular dishes, companies are also launching products that are not just country specific, but also region specific. Region specific special dishes, though a niche market, find many takers.

“We, at McCain, offer a range of international favourites and local products like McCain Aloo Tikki, McCain Chilli Garlic Potato Bites, McCain Veggie Burger and McCain Idli Sambar Combo Pack to cater to local tastes and preferences in the Indian market. In fact, we have introduced trial packs at Rs 29 to induce trials,” says Mukherji.

Gilani says, “Apart from the usual range of Dals, Rice products, Pav Bhaji, etc, there are some unique products in our range, including a range of Halwas, specialty products like Dhansak, which is a popular Parsi dish, and also combo meals. The combo meals are a combination of rice complimented with a gravy item (Dal or Rajma). This provides a complete meal for one.”

The companies are also working hard towards marketing these products in a proper manner. It is a well known fact that people prefer food items that are tried and tasted; this holds well in the case of RTE as well, wherein companies launch trial packs and also conduct demos for consumers at modern trade shops. Moreover, McCain has tied up with several RWAs (Residents’ Welfare Associations) in Delhi and has been conducting in-home kitty parties to reach out to homemakers.

On the retail front, the need is to reach out to the right consumers. The RTE segment mostly attracts the youth or the working moms, so a right placement is needed. Consumers tend to do a quick pick of chips and biscuits, so the RTE packs should be kept along with the quick picks in order to grab more eyeballs. Moreover, the retailers should also tie-up with companies and run awareness, marketing and testing drives so as to raise the consumption numbers.

These laws are in place and look almost perfect, but they exist only on papers. The real need of the hour is to properly implement these laws. According to previous reports, it was ideated to the government that the laws need to be worked upon to make them stringent, but all that is needed is the right implementation and consumer awareness of the existing laws. Bejon Misra, Founder of Healthy You Foundation and former member of FSSAI, says, “It is essential to create awareness among people, especially children, as they are the individuals who drive the buying patterns of parents, depending on what kind of awareness is shared with the children.”

He adds, “The number of unorganised players in the market is huge; this not only lowers the quality of products being sold to consumers, but also kills the market share of the organised players, who adhere to the laws and regulations. We have been apprising the government of this situation, but the politicisation of things makes it a difficult situation to overcome. Right now, the ball is in the government’s court to get better implementation of the existing laws.”

Bejon Misra has been into the consumer awareness domain for the last 28 years.

The market for ready to eat market is set to grow in India, as consumer demand for this product is high. With more and more people becoming a part of the corporate culture and working awkward hours, these packs are coming across as the panacea to their cooking woes. With more delicacies being launched and the right marketing strategy being adopted, the future looks promising for the ready-to-eat segment.