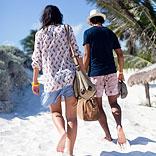 If you want to holiday in an exotic foreign location this summer, all you need to do is shop! With the introduction of promotional shopping campaigns that offer “all paid foreign trips”, shopping has become the new way to holiday these days. The economics behind such campaigns are very well defined, with the companies and customers always willing to participate in it.

Recently, companies including Delhi Duty Free, in collaboration with Tequila Corralejo, and Myntra.com had launched such campaigns.

Fashion online retailer, Myntra.com, had unveiled the campaign called ‘Paris Calling’, wherein a shopper had to shop for Rs 2,000 or above to become eligible for winning an assured gift, which included an all-expense paid trip to Paris for two couples. Delhi Duty Free, on the other hand, collaborated with Tequila Corralejo to launch a campaign, wherein a person buying a bottle of Tequila Corralejo was eligible to win an all paid trip to Mexico.

Why “an all paid trip” campaign?

Rewarding customers has become a key business strategy in today’s time. These campaigns come across as strongly rewarding, as a foreign trip normally costs somewhere between Rs 4-6 lakh. Customers are enticed to shop more and become a part of such campaigns, which bring loyalty to the brand and rewards to the customers.

“India is an entertainment deficit country. Unlike countries like Dubai, Europe and Singapore, which have several options inside the city itself, India lacks many entrainment options, which can be given away as prizes. Here, when it comes to entertainment, visiting malls is the only option apart from going on a holiday. This is a major reason why all paid trips are becoming an exciting and rewarding option as giveaways,” says Abhijit Das, Head-Marketing, Delhi Duty Free.

Moreover, this also brings customer satisfaction for the companies, as the interaction between customers and the brands becomes stronger.

The companies that these brands tie-up with are also more than willing to become a part of the campaign, as it helps in promoting their services among people.

The destinations, according to Das, are chosen depending on the concept of the promotion, target audience, budget, VISA requirement and procedural requirement.

Moreover, a lot depends on the kind of brand that is promoting the campaign. For instance, a brand targeting the youth would offer destinations like Thailand, Bangkok, Singapore, etc, while brands targeting the high-end sophisticated class would offer trips to Italy, Switzerland, etc.

For instance, Myntra was targeting the fashion conscious people for which they chose a destination like Paris, the capital for fashion.

These campaigns are majorly unveiled to promote the newly launched products and brands. Companies come up with these campaigns to up their sales, bring prominence to their brands and also to boost traffic to their stores and/or website.

"This was the first time that Myntra came up with such campaign. The idea was to draw attention of users as well as bring in new people. We wanted to attract customers for our new Spring/Summer 2012 collection for which we thought this would be a good marketing idea. Though the response has been average but we see this as a proven method of promoting products and up sales," says Mukesh Bansal, Founder & CEO, Myntra.com.

In case of Myntra.com, the campaign was launched to promote and up the sales of its latest Spring/Summer 2012 collection, while in the case of Delhi Duty Free, it was a new brand that it collaborated with and promoted.