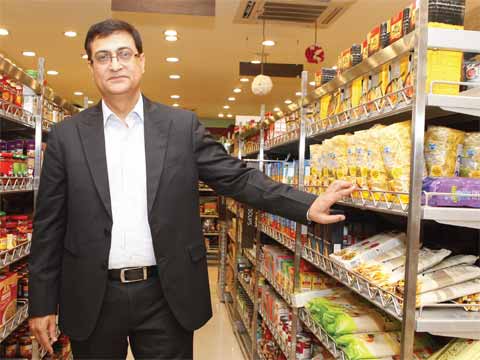 The growing consumer confidence is evident

There are two forces simultaneously at play. At one level, there is a general positive macroeconomic sentiment, which will lead to an increasing consumer confidence. That is something that we have seen as evidence in the last couple of months. And we do believe that going forward; the economy will only continue to improve. That essentially means that there are going to be more footfalls into the stores and possibly higher sales per store etc. As a retailer we value that and improving consumer confidence could mean that if the market grew at 8 to 10 per cent last year, this year it would be 10-12 per cent that the consumer is going to spend, hopefully, a little bit more.

There is an increasing realisation that eCommerce is growing and eCommerce is something that the brick-and-mortar retailers shied away from a year or two back. But, the last one year, particularly, the last quarter has been a big eye opener in terms of what eCommerce can achieve or has achieved. We have seen single day sales crossing mind numbing numbers completely. Certainly, eCommerce has greater play in Fashion and CDIT. Food & Grocery (F & G) has yet to see big evidence in it. One of the other contributing factors is that F&G does not have large margins, but is a volumes game, while eCommerce so far has been working on a reverse play. However, I feel it will be playing a far more important role this year.

Furthermore, online business is a very people-intensive business; it is not very capital intensive as it is operations intensive. Two, F&G per say doesn’t lend itself to discounts. So, one needs to be conscious about operating it. Investments to that extent will be very modest, there wouldn’t be great investments, but needs greater operational precision.

If you ask me how I see the industry going forward, I would say that there is a far greater pragmatism in the industry. Physical expansion and opening of new brick-and-mortar stores that will happen will be far more pragmatic and realistic. One would not open stores for the sake of doing it, but where one would truly believe the store is going to be profitable and unit economics works in its favour.

We, in general, over the last five years or so, have grown almost roughly 3-4 times of the industry’s growth. Even in the coming year, we do believe that if the industry will grow at 10-12 per cent, we will grow more than 2.5 times of that. That’s clearly our plan. In terms of online stores and the eCommerce, we are becoming far more powerful than what we have been so far.

There is a great merit in being an omnichannel player and if you can leverage your brickand-mortar strength to service the eCommerce operations, then obviously there is greater merit in doing something like that. eCommerce, generally speaking, survives on two things. First, it requires a great user interface, and a great operation infrastructure. If you are able to strengthen them, then there is a greater chance of you to be the destination choice for the customer.

Nature’s Basket has been one of the few retailers that has been doing home delivery to a very large extent. And we have a fair quantum of home delivery orders that we service on a day-to-day and on a month-to-month basis. The growth rate in home delivery is even greater than the physical store sales growth at this point of time. As a Food Retailer, we would continuously strive to raise it further.

Nature’s Basket has been extremely consumer centric. For almost everything that we do, whether it is a product that we are selling, or the way we design our stores or the services that we offer in the store, or the response that we give to our customers across channels or platforms, as an organisation, we have never believed that customer centricity or customer satisfaction is a role of one department, or it is done by one set of people. Unless an organisation is oriented in a particular way, you can’t achieve that. And that is something we will continue to do. I’m looking at 2015 with great optimism.

There is an increasing movement towards convenience buying, and the second trend is a movement toward healthier eating option. Consumers indulge a lot, but also very consciously these days. And that’s the second visible trend in 2014 that will continue in 2015.
Mohit Khattar
Retail
Godrej
nature\\\\\\\'s basket
Trending Article