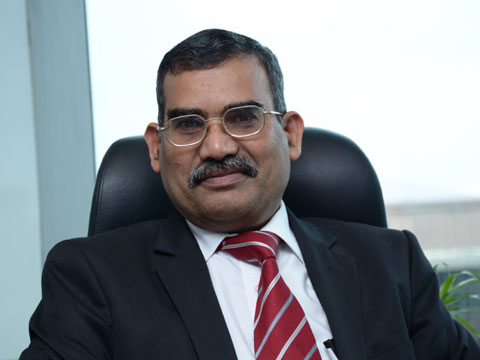 National Payments Corporation of India (NPCI) has partnered with Reliance Retail stores to promote mobile based UPI app payments as in-store payment solution. The move opens path for faster implementation of NPCI’s mission to drive cashless payments and the Digital India Initiative. Customers can use any UPI-based app including BHIM or any other Bank promoted UPI app. On the sidelines of the announcement of partnership recently in Mumbai, A P Hota, MD & CEO, NPCI spoke to Indianretailer.com, while revealing the future targets of digitising transactions, strategies, government’s ambitious target of placing 5.5 mn PoS terminals across the country.

What will be the process to be followed for the in-store payment?
For in-store payment Axis bank as a partner has designed POS device in such a way that retailer can accept the payment from mobile. In the process in-store PoS device will generate the QR Code and that code can be scanned through mobile by using UPI application to make instant payment. In the QR code, the amount is also captured so the consumer doesn’t need to punch the amount. The process is further simplified by Bharat QR Code.

In a day how many transactions happen using UPI?
We are now clocking 2.2 lakh transactions a day. Out of these transactions around 80k to 90k transactions are happening across BHIM based applications. Average value of the UPI transactions is close to about Rs 3000 per individual and around 44 banks are live with UPI.

What is the government target of digitising transactions through UPI and what is the strategy?
Government has set the target of 25bn digital payments in 2017-18. Presently the volume is less than 10 bn. UPI is available on smart and ordinary feature phones and we want it to be the main vehicle for the payments. NPCI has started a service called *99# for ordinary feature phones to make payments through UPI. Hence to reach the target it would require the tremendous amount of work.

Around 95 percent of the payments happening in transportation are still in cash across the country. The bulk of toll gate payments are in cash and now we are converting them into digital thorough ETC lanes at national highways. Even the state highways will also go ETC way.

So far how many PoS have been placed by banks and what is the target for this year?
At Kirana stores payments are still done in cash because they don’t have PoS machine. Before demonetisation there were only 1.4 mn PoS terminals and in the last 3-4 months another 1 mn terminals have been added.

Further the government is aiming to take the total number of PoS terminals to 5.5 mn across the country by September 2017. There will be 1 mn traditional PoS, 1 mn QR code based PoS and 1 mn Aadhar based PoS added. There are large five banks that have 80 percent of the PoS terminals. Updating PoS is a yearlong activity.

When is the government planning to launch Aadhar Pay and what will be the process?
On 14th April the PM is going to launch Aadhar based payment system. In this system, customer can walk in the retail store without mobile phones or without credit or debit card. He just has to know his Aadhar number to make the payment to the merchant. Purpose of the Aadhar Pay is to widen the digital platform for more and more merchants to come on board.

But, still in our country the consumer awareness and financial literacy about digital payments is missing. Hence, to increase awareness the new financial literacy programme is being planned by the government in co-ordination with RBI and other banks. In the budget also, the government has announced BHIM referral or UPI referral programme under which both consumers and merchants will be given cash back rewards and that way the promotion will take place.

How is the progress with Aadhar authentication and do you also plan to integrate biometrics into the UPI platform?
According to RBIs mandate, all upcoming PoS should have Aadhar authentication facility, but none of the banks have implemented Aadhar authentication yet. It was to be introduced from 1st January, but now that has been extended till 1st of July. We have planned biometrics into UPI. We are designing it in such a way that it can take fingerprint as a form of authentication. Enablement is ready at the backend and it is just matter of time. In Aadhar pay, the terminal would be the mobile phone of the merchant itself. Sooner or later we are going towards mobile first strategy.

What about the bug that was recently found with BHIM which led to huge loss of money for Maharashtra Bank?
The bug was created by about 50-60 people near Aurangabad. They figured out the loophole in the system and robbed about Rs 25 cr from the bank. These people had accounts in 19 other banks. So far the bank has recovered some amount and some is still at large. We are now not allowing any bank to join UPI unless they have a thorough re-conciliation process.