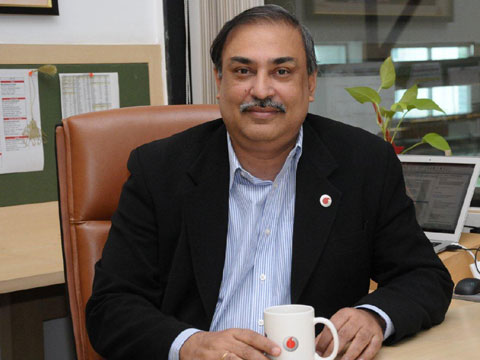 Aiming to replace the need of point of sale (PoS) machines, Vodafone India recently launched e-wallet M Pesa Pay to enable merchants and retailers to receive payments from their customers. The wallet offers payment and money transfer option to end users for a while and then enables them to register as merchants. This launch of e-wallet by Vodafone is another move by tech companies and service providers in India to encourage digital payments, which has received fresh impetus from the recent demonetisation chapter. Thus, commenting on the features of the wallet, Sunil Sood, MD & CEO, Vodafone India spoke to Indianretailer.com.

What are the advantages of Vodafone M-Pesa?
By using M-Pesa Pay, consumer wouldn’t need to keep cash in their pockets. It works both offline and online. Vodafone M-Pesa Pay is also connected with 1,30,000 outlets, where consumer can cash money or convert the cash into electronic money. With the app, consumer can transfer the amount to their relatives in villages and relatives can cash the same money from nearby outlets. These outlets help immigrant workers to cash out the money. The Vodafone M-Pesa Pay also includes merchant system, so that ordinary merchants like shopkeepers can register with it. M-Pesa Pay is connecting Bharat and India.
As RBI has increased the limit on e-wallets, consumer can transact Rs 20,000 from the previous limit of Rs 10,000. For merchants the limit stands at Rs 50,000 and for consumers who have given their details, the digital wallet limit stands at Rs 1 lakh.

How are you making it easy to understand for all users?
The digital world is largely for upper class in India and common man doesn’t know credit and debit card transactions. He knows only cash, which he uses largely so we have made it easy for everyone to understand. Through M-Pesa Pay, transaction can be done only in three clicks. We have kept a pin number for the transactions for full security assurance. M-Pesa Pay transactions are not limited to smartphone users. This can be used through USSD by all the prepaid users.

Merchant can be a consumer, so is the app compatible for all users?
The user mode for Merchants and customers is different in the app. Merchant can use both the parts, he can use the  wallet as well as transfer the money to pay the electricity bill and other utilities.

What is your active number of users of Vodafone M-Pesa and what is the future target?
We have around 2mn users actively using M-Pesa every month. We can’t give futuristic figure. We have massive army on ground executing and they are already appointing 1000 merchants per day.

What is the amount of transactions you are expecting three months down the line?
We are expecting millions of transactions on a daily basis as this is the need and the execution lies with us to create ecosystem as soon as possible. With our bank partnership, we are also able to cash out and that is where we are updating the government subsidy business, doing money transfer, those who are saving money on the mobile can actually go to the outlet and withdraw the same.

How will your telecom coverage help M-Pesa Pay?
As a telecom player, we have 1.9mn outlets and within that we have 10K points where Vodafone itself has its own stores, so it’s a huge advantage in terms of distribution. So, naturally as telecom powered payment bank, we will be able to leverage on our entire network of retail outlets.

How do you see the competition with players like Paytm?
The more players we have, the fastest network there is. If you have larger ecosystem accepting the money, then it will be easier for everybody to move forward in this journey. What is critical for us is the ability to cash in and cash out and we have pan India network for the same.