We are ambitious to achieve 2527% growth YOY: Kishore Biyani 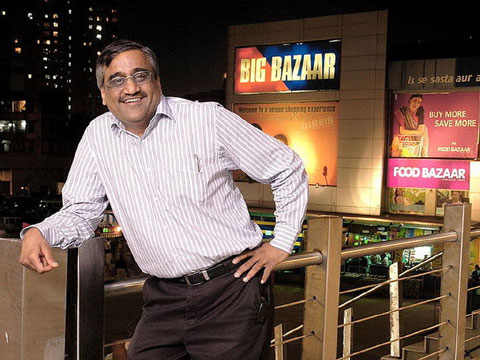 Buoyed by the 300,000 member’s acquisition for the Fbb SBI Credit Card, Central, a chain of fashion departmental stores by Future Lifestyle Fashions, in partnership with SBI Card has recently launched Central SBI co-branded credit card in two variants SELECT and SELECT+. While significantly benefitted by the massive boom in the digital transactions post de-monetisation with this partnership, the Central is planning to achieve 500,000 members in the next 3-5 years. Future Group is also planning to add 16 more Central stores to its current count of 34 in the next 12 months along with targeting to earn more than Rs 3,500 cr in 2017-18 fiscal. Therefore, speaking about the strategies of the company in alliance with SBI Card and much more, Kishore Biyani, Group CEO, Future Group spoke to Indianretailer.com on the occasion of launch of Central SBI co-branded credit card.

Please tell us about Central partnered with SBI Card to offer co-branded credit card to the consumers and how it will contribute to the growth?
We have launched Central SBI co-branded credit card in two variants SELECT and SELECT+, one being the base and other being premium at the price range of Rs 750 and Rs 2999 respectively. There will be a gift voucher of Rs 5000 for the premium card and of Rs 1700 for the regular card. The reward point of 20 will be given for each Rs 200 spent for premium and Rs 100 for regular card holders at Central stores.
With this card, the State Bank is also offering EMI credit to card holders, so that consumer can buy whatever they want and they can pay it in 5 or 6 installments without any interest rates. We will take such tie-ups to other brands like Big Bazaar and other banks as well.
When we get a credit card member, he gets aligned to that format of card which earns us the loyalty of that consumer. Then, we know him as a consumer with his data with which we can create some promotions for him.

While there are number of cards in the market, why did you think of launching a new card?
We had also formed the alliance with SBI in December 2014 with our new brand Fbb to offer Fbb SBI Credit Card, especially to the aspiring youth and the students in the country. The partnership paid huge dividends for us. We had planned to acquire around 300,000 consumers and we achieved that figure. Hence, with this Central and SBI Card partnership, we are targeting to achieve 500,000 consumers in 3-5 years of time. Our FBB and Central SBI credit cards will be more than the entire cards of Citi bank.

Do you think unorganised retail sector is also steadily moving towards organised sector with the growth in cashless transactions?
This happened in every country with the evolution. Before November 8, organised retail was growing at 20 percent and the normal trade was at 6 percent YOY and now this year, post demonetisation, I expect the organised trade to grow by 20-25 percent and normal trade to grow less than that.

What are your store expansion plans for Central and what is the revenue target?
We have around 34 Central stores and planning to launch 16 more stores in the next 12 months. Central stores are large-format stores measuring anywhere between 60,000 sqft to 230,000 sqft. Thus, with this expansion, we are looking at more than Rs 3500 cr revenue from Central in fiscal 2017-18.

What are your strategies for Future Consumer Enterprise?
We are preparing Future Consumer Enterprise for the consumption pattern of the youth. The company has grown well this year and next year we are expecting to grow by 70-80 percent. Now, we are looking for the GST taxes and planning to grow the quantity of products and reduce the cost with benefitting the consumers. Food and home care products are doing well in the market.
For the Future Group, we have a stated ambition of 25–27 percent growth every year for the next three to four years.

What are your expectations from the upcoming budget 2017-18?
Consumption can drive growth in this country. In the budget, we expect that the government should incentivise the consumption as there are always incentives on savings in India. It should offer incentives on spending along with the concessions in tax. We don’t look at sops to be very honest, but we look at level playing fields and GST which will help formal trade significantly. We hope that GST comes in as fast as possible.