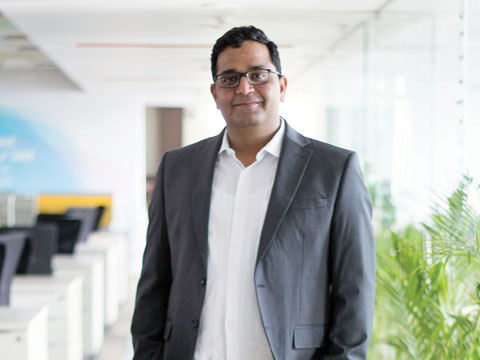 Very soon Paytm will be bracing to launch an ecommerce app, Paytm Mall under the independent entity Paytm eCommerce Pvt Ltd. The company is in the process of increasing the number of merchants on board from 4 mn to 10 mn by the end of this year, while planning to raise around Rs 1000 cr from the independent investors. It is aiming to work with such a large number of active merchants on its O2O platform to deliver the products to the consumers from their nearby retailers or suppliers. Hence, on the verge of launching its much awaited payment bank this month, Vijay Shekhar Sharma, Founder, Paytm spoke to Indianretailer.com during Retail Leadership Summit, which recently happened in Mumbai.

Post demonetisation, is the traction at Paytm same as earlier or reduced?
We have created new category called offline merchants, which had large number of transactions, but now with the smoothened cash flow post demonetisation, the tractions have reduced 10-15 percent in February by small merchants. In the next two three months there will be a total of 20-25 percent reduction in the transactions. But, the transactions by large merchants like petrol pumps, retail and toll transactions have increased and it will keep growing.

Do you think the UPI app like BHIM is posing stiff competition for wallets?
The wallet companies more or less are independent as some banks have launched payment wallets, but have not been much successful. Especially for the bank customers, the payment app was missing, so UPI BHIM is a welcoming move by the government. There was, is and always will be the competition, but ultimately it has benefitted the consumers.

What is your focus on your Paytm eCommerce platform?
We will soon launch an entity called Paytm eCommerce Pvt Ltd. and the app with the name of Paytm Mall and will raise funding of Rs 1000 cr from independent investors. Instead of GMV, we will focus on signing up with large number of retailers, merchants and active merchants and work with them to deliver the products to the consumers from their nearby retailers or suppliers. Overall we have 4 mn merchants and convert maximum of these merchants into eCommerce merchants is our target. By the end of the year we are targeting to bring 10 mn of merchants on board to sell large number of SKUs. We call our platform O2O, Online se Offline, which means order online and delivery will be offline.

Presently on Paytm eCommerce there are less than Rs 1000 cr transactions happening a month.

Tell us about your funding plans?
We have raised last round of capital from Alibaba in August 2016. We will raise Rs 1000 cr for our marketplace business, Paytm eCommerce Pvt Ltd. from independent investors and we are in the process to close it soon. This is the largest first round of funding for any company in this country. We are raising money in this environment where people are not raising money and this is not a small check either.  There are tons of investors who have shown interests in our business model. The paytms valuation is $1 bn.

Does Alibaba continue to be the largest investor in Paytm?
Individually, they are already the largest shareholder.

Are they entering India through your platform?
That I can’t say because they are still just a share holder in our company. Alibaba’s plans are different and what we are building is an independent entity. None of the shareholder will become more than 40 percent for sure.

Will there be the merger of Snapdeal and Paytm?
No, as I said we are building our own entity. With Alibaba, we are just talking as shareholder and board members Alibaba continues to do deals beyond us. They have probably invested in cinema ticket chains, UC Web.

How has been your association with Future Group and other retailers?
The retail industry has welcomed us well and I am really hopeful that they will continue to work with us because we do not challenge them as an online player, but we actually give the power of online to their businesses. If you notice, our business model is that we give an order from online to future retail and any other retailers who are partnered with us, so they get incremental orders as we bring the traffic. So, we truly behave like we are a mall and they are a store, which is the model. Our ecosystem retailers are our partners and currently we are working with every organised retailer.

Please tell us about your upcoming launch of payments bank and what will be the strategies?
We will launch the bank before February 28, 2107. We have got the final license from RBI, preparations are done and still we are waiting for some approvals, which are in process. Also, first we are working on setting up good distribution channel for cash flow give and take. At one side, we are obliged to serve underserved and un-served, who have bank account, but not with all the facilities or restricted or low fill account and on the other side we have our wallet consumers to convert them into payment bank consumers. From the current 189 million wallet users we are aiming to have 500 mn consumers of wallet, current and saving accounts in our payment bank by 2020. The large number will be of current and saving account.

This country has 1.2 bn people and about 200 mn households, so every household and every woman needs to have a bank account. We are specially focusing on women, on the places where banks have not reached and where money is being lent at exorbitant price, so there is a tremendous amount of tougher and rough market which we call as Blue Ocean. Because the current servicing of the financial market is left to unorganised financial services providers. We will largely focus on offering seamless mobile banking experience to the consumers.