We plan to open 7-8 Noritake stores in every major metro cities by 2020: Saurabh Garg

Retail People
We plan to open 7-8 Noritake stores in every major metro cities by 2020: Saurabh Garg 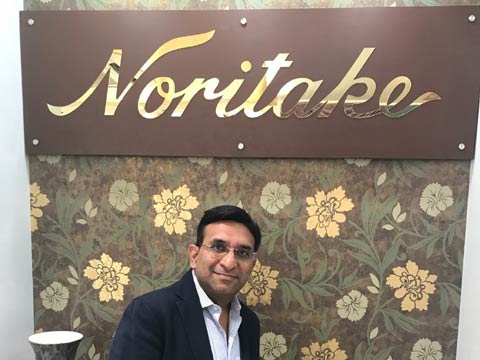 Luxury store Ekaani, a one-stop shop for gifting solutions from foreign brands like Versace and Roberto Cavalli, has announced the entry of Japanese luxury tableware brand Noritake in the Indian market. The Japanese tableware major has entered into a retail partnership with Ekaani and opened its 1,000 sq.ft. flagship store in New Delhi’s Defence Colony area on Tuesday. Apart from brand’s previous collections, Noritake has launched 4 new designs for the Indian market, and has named it as ‘Hearth Collection’. For this particular collection, Noritake has gone an extra mile in order to give it an Indian touch. The inspiration for these is taken from arts and crafts, flowers, gardens and palaces of the country, so that Indian consumers can relate to these. Indian Retailer spoke to Saurabh Garg, Director, Ekaani Group, in detail about this partnership and the company’s plans to move further in the luxury tableware and gifting segment. Excerpts from the interview..

Tell us about Ekaani Group, its history and USP.
Ekaani is just 4 years old enterprise which started with silver plated gifting. Later, we realised that silver plated gifting was festive centric business and started getting into distribution for companies like Rosen Thal and Versace, which brought us in the dinnerware segment. Ekaani Group essentially caters to higher class and the luxury segments. We opened our first store in Mumbai and now we own 19 stores. Recently, we took up distribution for Noritake in India and we will sell Noritake through existing Ekaani stores, through new Ekaani franchise stores which will include an umbrella of all the brands under Ekaani.

Ekaani is known to be the best in the country for its dinnerware and glassware brand portfolio. How will Noritake help in further glorifying this portfolio?
So far, we have been representing likes of Rosen Thal, Versace and Roberto Cavalli which are very high-end dinnerware companies. The price segment is only suited for a very high income group. Now, Noritake is a brand which is much more affordable in price in comparison to these European brands. Tough it has ranges which are priced even higher than these European brands. But Noritake has a very high palette of designs and ranges which are suited for Indian segments. We are trying to increase our bandwidth by adding on other upper middle class and other homes.

How do you see India as a potential market for luxury goods?
India is growing faster than most countries in the world and the growth can never be exponential. It will only happen at a percentage every year. If you look at it over a decade, you will see major changes not only in infrastructure but in homes and everything else. The India market has reached a level where it has passed the struggle of buying a house; it’s now working on making a home which includes interiors as well as tableware.

Tell us about the terms of this retail partnership between Ekaani and Noritake
We are retail and distributing partners for Noritake for North, West and East India, which means that every retail outlet, whether it’s the crockery channel or any other channel, the distribution goes through us. We maintain stocks, we carry orders and we supply to the entire retail channel. At the same time, we also market to corporate or for wedding buying or direct customer buying in terms of bulk sales. Our endeavour is to place Noritake into more lifestyle stores and even in jewellery stores or furnishing stores which have lifestyle sections and not just in crockery outlets. So basically, we would want to create a space for Noritake at any retail outlets where there is good footfall coming.

Give your insights about relevance of and opportunities in tableware industry in India.
If you go back 10 years, we were still eating in stainless steel tableware. So the crockery trend has just come in. In India, this is just the beginning, because we have just started moving away from metalware being used as utensils and crockery to porcelain and bone china. So, there is a huge market waiting to be tapped.

How do you see competition in the category? How does the presence of an expansive unorganised sector affect the organised players in India?
We are very well placed right now and as compared to European players, we are much better priced and have more beautiful collection suited for the Indian eye. We have a lot of gold and platinum in our designs and they are generally more suited to Indians as compared to ones from the likes of Rosen Thal whose designs are more European, which Indians don’t identify with. When it comes to Chinese products or the unorganised market players, first of all, their designing as well as quality is not at par with the set standard. Secondly, government initiatives like GST and the imposition of anti-dumping duties on China have drastically helped us, as a majority of unorganised sector imports are from China. Besides, India has a SAARC trade agreement with Sri Lanka wherein we only have to pay 5 percent custom duty for imports, which really works in our favour.

What are the plans for expansion of the brand in India?
By 2020, we hope to establish 7-8 brand stores in every major metro cities. We are planning to establish brand displays and brand corners in other cities where we can get adequate space and nice displays. We also have an e-commerce platform coming soon and we will be linking it to our retail stores so that retail gets to benefit from online sales. Noritake will be having its own e-commerce website as well.

Do you think franchise is a viable model for expansion? What are your plans to expand your brand portfolio through this model?
Ekaani has continuously been expanding through the franchise model. We very much believe in partnerships and sharing of costs and benefits. So, franchisee model is one that we are looking at.