It\'s quite exciting when an Indian buys out any international brand with the intention of bringing it into the country. Franco Leone\'s story has been similar. Narrating the journey of the brand over the years, Mr.Fuzail Ahmad, Business Development Head, 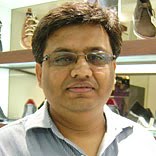 It's quite exciting when an Indian buys out any international brand with the intention of bringing it into the country. Franco Leone's story has been similar. Narrating the journey of the brand over the years, Mr.Fuzail Ahmad, Business Development Head, Franco Leone talks up the prospect of footwear in the country.

Aadeetya Sriram (AS): Tell us about Franco Leone, when did you startup?

Fuzail Ahmad (FA):  Franco Leone started up around 30 years back. Franco & Leone are basically two Italian designers who formed this brand and later they sold this brand to Mr. S.C Bhambri, who is a Delhi-based businessman.  He had the knowledge about footwear and he is the one who has established this brand in India. Earlier they were exporting this brand to Russia, but after the fall of the country, the economy experienced a  debacle. After this, they concentrated on domestic market and they have created a niche product i.e. Franco Leone. We are focusing on the formal footwear category. It is a well-known brand in India, available in 700 stores across the country, which includes the MBO’s as well as the chain-stores like Shopper-Stop, Lifestyle, Reliance, Big life and Metro as of now.

AS: Why have you forayed into the footwear retail segment?

FA: Since we wanted to upgrade the positioning of the brand, that is why we have been undertaking a lot of activities in terms of advertising through different media whether it is outdoor or print media. But to enhance or uplift the brand equity, we see the need for us to set-up our own flagship stores to enhance our image in the market as a brand. It also enables us to present our wide range of products, which is not possible with the MBO’s.

AS: Are you manufacturing the footwear as well, if yes, where do you have your units in the country?

FA: Yes, we do manufacture our products in the country. We have 3 units; 2 units are in Badli and 1 is in Greater Noida. Considering the rise in demand for footwear in the country over the last few years, we will soon be setting- up couple of more units in the country; this will be located in Bahadurgarh. We can produce 3000 pairs at the moment.

AS: Footwear requires quality designing, finishing etc. do you have any design set-up catering to this?

FA: As far as the designing is concerned, we have two designers based in Italy; Walter & Alberto, we have hired them to design Franco Leone products. They travel to the European countries to be updated with the latest trends in design & fashion over there and provide us with various samples, out of which the most viable ones for the Indian market are chosen and taken into the manufacturing process.

AS: From where are you sourcing your raw materials for the products?

FA: We primarily source our raw materials from within the country and at times there are requirements for some which are not available in the country hence sourced from abroad.  We source leather from Chennai & Jalandhar Tanneries. We have sole manufacturers in India. We get the moulds from Italy and manufacture the footwear in India.

AS: Could you share the technology that is being undertaken by Franco Leone for its footwear production?

FA: Franco Leone has always been avid follower of latest technology with regards to our footwear manufacture. Recently we have introduced Direct Injection PU-sole (DIP), with this facility our footwear does not have any in-sole, which increases the flexibility of the shoes, and it is also very light.

AS: You are specifically catering to the men’s segment in your flagship store, reasons?

FA: We have always been associated with men’s footwear & accessories. The flagship store has enabled us to showcase our whole range of products under one roof, which is convenient to the customers.

AS: In terms of men’s footwear we have seen drastic changes in their taste and preference, what trends do you follow in the country currently?

FA: Trends concerning formal footwear is on the rise, especially fashion footwear. They prefer the ones with long toes, shiny leather & light-weight shoes and the demand for the same is expected to rise in the near future. In the casual segment, we’ll be seeing varied colours.

AS: Are you into any licensing agreement with Playboy for their products & merchandises?

FA: We have a licensee agreement with Playboy international for footwear & accessories covering South Asia.