The best in the least

Right from his early years when he was a day boarder in Dr. Graham's School Darjeeling, Jay Gupta revealed a fine business sense that showed his adamant goal to start his own company. He conceptualised and set up the first THE LOOT store in mid 2004 - A m 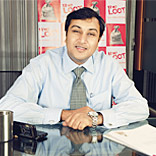 Right from his early years when he was a day boarder in Dr. Graham’s School Darjeeling, Jay Gupta revealed a fine business sense that showed his adamant goal to start his own company. He conceptualised and set up the first THE LOOT store in mid 2004 - A multi brand discount store.

Jasmeet Sahi (JS): How did the concept of a store like ‘The Loot’ take birth? What is the significance of the name The Loot?

Jay Gupta (JG): In 1996 I read an article in a magazine which pointed out hotels, banks and retail as ever growing businesses. I opted for retail, initially to get into the garment and footwear business by opening franchised stores for brands like Colour Plus, Adidas, Nike, Weekender, Provogue but soon realised that I was not able to give my best to the customers. The customers wanted to buy brands at affordable prices. After a lot of thought, I got the idea of giving the best brands to the customers at the best prices under one roof by setting up the 1st ‘The Loot’ store in 2004.  The Loot can thus be considered as the pioneer of multi-branded discount chain. The Loot was the only multi-brand retail venture that offered minimum 25-60 per cent off all 365 days of the year. Soon there was multiplication and The Loot as on date has set up over 140 stores (approximately 3,00,000 sq. ft. retail carpet area) in 80 cities and 22 states throughout the country.  “Loot”in hindi means to capture something for free. The idea of giving a year round discount and make desired brands available at affordable prices is synonymous with the concept. Hence, the brand name, “The Loot”.

JS: Which brands does ‘The Loot’ store retail? Are there any international brands also amongst them?

JG: The store retails about a 100 brands, both national and international. To name a few, there are brands like Reebok, Puma, Levi’s, Red Tape, Lee, Wrangler, Spykar, Allen Solly, Van Heusen, Eccentrics, Gini & Jony, Lilliput, Bus Stop and many more.

JS: Having won awards such as the Star Entrepreneur Award, Young Retail Achiever of the Year Award amongst many others, how does it feel to get this recognition in less than five years of launching ‘The Loot’?

JG: Though I feel great to have these awards, they also add a lot of responsibility to meet the growing challenges and aspirations of the consumers.

JS: How does The Loot store make a profit if all products are always on a discounted price?

JG: It depends on the deal negotiated with the brands. We maintain minimum margins while deciding on the costing and selling prices.  It is basically a volume business.

JS: What are your future plans? Do you plan to expand to other cities?

JG: To propel the growth of the company and to move to the next level, The LOOT has invested skilfully in IT. The company focus is also on personnel training and great emphasis is being laid on preparing the back end to take growth to about 200 stores by March 2010. A modern fully equipped and technologically upgraded warehouse has been set up at Bhiwandi, which can accommodate about 8-10 lakh pieces of merchandise to meet the growing demand of the expansion.

The Loot has tied up with Tata Consultancy Services (TCS) to implement their SME ERP solution in order to streamline and bring efficiency to its business. The company plans to come out with an IPO in the next 18 to 24 months. The Loot also plans to foray on foreign land and start off with Asian countries. The 1st such store will open in Nepal followed by other countries.

At the same time, we are planning to build an entire Loot campus for the necessary backend support. This campus will comprise of the warehouse, manufacturing unit, design team, fabric bank, training centre etc. to reach to the goal of being in the top three retail companies in the next three years

JS: What advice would you give to young entrepreneurs who want to enter the retail segment?

JG: Key facts to always remember are that a young entrepreneur must:

Identify the goal and pursue until achieved

There is no substitute for hard work

Find solutions rather than multiplying problems

There cannot be a player without a coach  who in my case  is Mr. Chhabra- C.E.O The Loot

I believe "Life is always tough, but one can make it easier by sharing one's dreams and creating co-dreamers to move up on the success path."