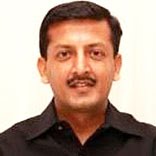 Such has been the rise of flower business in the country, that growth of brands like Ferns-n-petals has not gone unnoticed. What made them foray into this segment is something only the minds behind them can reveal. Here is Mr. Pawan Gadia, CEO  & Head of Ferns & Petals E-commerce doing so on behalf of the brand.

Aadeetya Sriram (AS): FNP has been present in the country as a brand for quite some time now, how has it been for you over the years?

Pawan Gadia (PG): We started in 1994; our first shop did well, which resulted in the opening of another shop and so on. Later on we were approached by people enquiring about the possibility of taking our brand into franchising. During this time, we realised that the scope of wedding as a business opportunity for us is highly viable. Initially we were not taken seriously with our offerings, so we arranged a wedding in Taj Hotel once, then later on we arranged in Le Meridian etc. In 2002, we started-up with our online division.

AS: How many stores do you have in the country? How much is the area covered of each and investment required?

PG: When I had joined in a decade back, we had 10 shops, presently we are have 110 shops spread across 45 cities in the country. Each store requires investment of around Rs. 10 lacs, and the size of each store is about 300-400 sq.ft. The size is such because fresh flowers are a perishable commodity, so the required portion in a store for storing flowers is 100 sq.ft; the rest is utilised for displaying other items, and then there is front side of the store. We are already visible in the Tier II & III cities, the idea now is to increase the number of stores in these region as well as the metro cities. Of the 110, 12 are company-owned outlets and the rest are franchise stores.

AS: Why did you go for company-owned shops?

PG: A flower business requires close-monitoring, which we have learned over the years. The transportation, handling and storing requires personal assistance. But now that the system is set, we have realised that we can grow more rapidly with company- owned outlets. That’s the reason why we will be  expanding our stores in Mumbai. Managing outlets across the country is not feasible for us through our own outlets, hence the number of such concept stores is limited for the time being.

AS: Flower has been regarded more as goods for devotional chores in the country, how were you able to create a standing for yourself since existence?

PG: I would say certain amount of luck as well as prediction. Flowers used in for the devotional purposes are not our speciality. What has happened is, over the years, customers are travelling across the globe which in turn is resulting into this deep exposure, understanding and knowledge of varied flowers available. The customers today are more expressive and also people today have more disposable income in their hands.

AS: What has your role been in arranging weddings of varied magnitudes?

PG: Wedding business is a high-volume concept; we just arranged a wedding in south India, which had only flowers of worth a crore. Our role in providing flowers has made people realise the freshness and glow in ambience that they bring when assembled in either weddings or in house itself. Also people with their taste & choice want to stand out and be noticed, same goes with the flowers been chosen for weddings especially the lavish ones.

AS: Where are you sourcing areas for the flowers across the world?

PG: We primarily source from Pune & Bangalore, these are the two moderate climate cities in the country, and this is where the majority of flowers are grown. We also source them from Uttaranchal. Talking about the international sourcing, they are majorly brought in from Thailand, China & part of it from Holland.

AS: Flowering business requires efficient logistic operations, in what way have you handled it?

PG: Every flower has a life, the moment it is brought in from the field till it reaches our godowns, keeping that in mind, we either fly-in the flowers or it comes by bus that depends upon the distance covered as well as the shelf life of the particular flower.

AS: What are your future maneuvers?

PG: We plan to double-up the number our stores in 2 years time. We will be opening our own office in Mumbai as well as 12 company-owned outlets. In Delhi, we will be opening 3 more outlets.