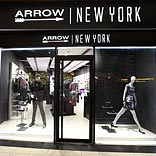 The blue blooded American brand Arrow has launched an exclusive store for their Arrow New York collection in GIP Mall , Noida. Arrow New York’s popularity and rising demand led to the launch of this modern 700 sq ft store in the city. Inspired by the art and fashion scene in New York, this store reflects the attitude of the hip, young and classy and yet remains uniquely Arrow.

The Arrow New York  collection was launched in 2011 and designed specifically targeting the youth. The collection is a range of stylish formal wear that will appeal to the youth who is a trendsetter, wants to stand out and edgy in his dressing. With the slim and lean fits coined ‘Zero calorie work wear’ , Arrow New York’s clout with the fashion-forward has increased considerably. The exclusive store for the range is already a hit with the customers.

The store also retails Arrow Woman – a chic line of ensembles for the urban woman, who wants Speaking about the exclusive store, Rishi Vasudev, COO, Sr. VP & COO, Tailored Clothing & Sportswear Division (Arrow, Gant, Izod), Arvind Lifestyle Brands Ltd. said, “We decided to launch an exclusive store for Arrow New York as we have received an overwhelming response from the customers. Arrow New York is a huge hit in India, especially amongst the youth and we think Noida is the perfect place for the first exclusive store and to catch higher footfall.”

The store is built from the conceptual level to the presentation level to reflect the atmosphere of the young corporate experience. Monochrome shades are used in the store to reflect the brand’s elegance and sophistication. The fixtures in the store are made of steel, wood and leather and much care was taken in the minute detailing of the usage of edge lighting and abstract mannequins. Props are used to project the new arrivals of the season and the floor fixtures are built to add to the feel of the concept. The trial rooms have special graphic rendered glass flooring with the view of the New York skyline.