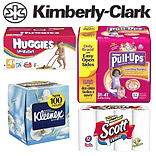 Kimberly-Clark Corporation has consolidated the North and South Asia regions into a single Asia Pacific model. According to the company, this region is one of the fastest growing and exciting regions and the integration will only simplify its business and help to better focus resources on key priorities, enhance its ability to quickly move innovation across markets, and further strengthen its ability to develop people, as well as provide them with an even broader range of rich career experiences.
The consolidation will be headed by Achal Agarwal, who has been promoted as President – Asia Pacific, effective from March 1, 2012. Kimberly-Clark International President, Bob Black, said, “Agarwal’s track record of success as President – North Asia and his depth of experience in the region has prepared him very well for this new role.” His new leadership team will include the Managing Directors of ASEAN, Australia, China, Hong Kong, India, Korea, Taiwan, as well as the region’s Finance, Human Resources, IT, Legal, and Product Supply functional leaders.
Kimberly-Clark
Asia Pacific
Consolidate
Achal Agarwal
Trending Article