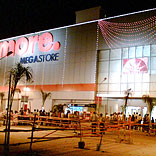 Kumar Mangalam Birla, Chairman of the Aditya Birla group, has revealed his plans to invest Rs 400 crore from personal wealth in order to ramp up the operations of the group’s food retail business. This business has been reeling under huge losses since the economic turmoil.
The money will be invested to set up 15-18 hypermarkets, selling almost everything, over the next two years. The aim is to catch up with the ever expanding rivals Future Group and Reliance Retail. Future Group's hypermarket chain Big Bazaar runs 138 stores across the country.
Birla's food and grocery retailing format was the only one to reduce losses to Rs 423 crore in FY’11. In comparison, losses of Reliance Fresh rose 19 per cent to Rs 160 crore. The additional investments in food retailing will be headed by Pranab Barua, who was recently shifted as the Head of Food Retail and Fashion Retail.
The blueprint has been created and will mainly upgrade the skill levels of store as well as field staff. According to Barua, though organised retailing brings comfort to shoppers, it has not yet found a way to nurture personal relationships with people. For this, the company plans to appoint a relationship manager at every store. The company will also work on the external supply chain.
The retail venture, which started operations in 2006, used most of its money in setting up small supermarket stores under the brand name 'More'. The company invested close to Rs 2,000 crore, but was forced to shut down 100-odd stores in the aftermath of the slowdown in 2008. The group now runs 550 supermarkets and 12 hypermarkets under its belt.
Aditya Birla Group
More
Hypermarkets
Future Group
Reliance Retail
Fashion
Pranab Barua
Trending Article

What are the merits of Using a Virtual Private Server?
6 min read
Anderson Lele
Share
YOU MAY ALSO LIKE