The sector has the potential to grow up to 10 times if the UP government allows FDI in retail. 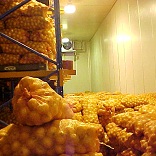 LUCKNOW: With 41 per cent of the total cold chain storage capacity of the country, the sector has the potential to grow up to 10 times if the UP government allows FDI in retail, industry body Assocham has said.

There is immense opportunity of improvement for this sector in Uttar Pradesh and can grow up to 10 times in five years, says the Assocham report.
UP has cold chain units with storage capacity of 1.4 lakh tonnes, Assocham secretary general D S Rawat said, adding that it comes to 41 per cent of the total capacity in the country.
Rawat said there was immense opportunity of cold storage sector in the state where 40 per cent of the product were destroyed due to lack of facilities. He added that at present new cold storage of Rs 14,000-15,000 crore were being constructed in the state which would be ready in next two to three years.
After UP, West Bengal with a share of 23 per cent is at the second place in cold chain sector and Punjab on third with 5.5 per cent share, the report added.
FDI
retail
UP
cold storage
industry
ASSOCHAM
Trending Article