To set up two plants and an R&D centre. 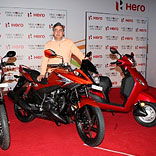 Hero MotoCorp, the leading two wheeler maker, has unveiled its plans to invest Rs 2575 crore. The investment will be utilised to set up two new plants and an R&D centre by 2013-14. The two new plants will boost capacity to over 9 million units.

The two new plants will be set up in Gujarat and Rajasthan. The first plant will come up at Neemrana by the first quarter of 2014 at an investment of Rs 400 crore and will have an initial installed capacity of 7.5 lakh units per annum. The Gujarat plant will see an investment of Rs 1,100 crore and have a capacity of 1.2 million units by the second quarter of 2013-14.

According to Hero MotoCorp MD and CEO Pawan Munjal, with fourth and fifth plants getting on stream, the total manufacturing capacity in India will reach beyond nine million units from the current capacity of seven million units. The next step for Hero will be moving towards the South and aim to spread the manufacturing operations across the country.

The company also announced plans to set up an integrated research and development (R&D) centre, spread across 250 acres, near Jaipur in Rajasthan with an investment of Rs 400 crore. The new facility would enable Hero to independently design and develop bikes, scooters and other two-wheelers after it snapped its 27-year-old JV ties with its Japanese technology partner Honda in December 2010.

The new centre will have an in-house collaborative product designing and development capability along with a 2.1 kilometer race track for testing superbikes.

Moreover, another Rs 500 crore will be invested to expand capacity of the existing plants  at Haridwar, Daruhera and Gurgaon.