Will double exports in two years. 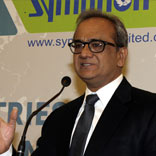 With the rising demand in global markets, Symphony Limited aims to double its export to 200,000 plus units within the next two years. The company’s exports currently are at around 125,000 units per annum. Symphony exports to dealers across 60 countries as well as to global retailing giants like Wal-Mart, Sears, Home Depot, Lowes, Famsa and Costco amongst others.

Symphony’s ‘DiET’ range of air coolers has emerged as the largest selling brand outside India. Wal-Mart stores in Mexico itself are expected to sell 30,000 units in calendar year 2012, while another 60,000 units are targeted to be sold in other countries. The Diet coolers come with advanced electronics, a stylish digital control panel, a fully loaded remote, it occupies very less floor space and comes with incredible energy efficiency.

Sharing his vision for the export markets, Achal Bakeri, Chairman and Managing Director of Symphony said, “Due to global warming the demand for air coolers is going up considerably and new demand is emerging from even relatively colder countries like Russia and Ukraine. We would like to grow more in each country where we are present and expand to new ones. From 60 countries, we would like to expand to 100 countries in the next few years. Our presence in global markets also helps us to de-risk the seasonal susceptibility in India.”

He further added, “We have introduced our products in these markets at various stages. In some countries our products have been just launched and are at the beginning stage, while in some other countries these products are used extensively.”