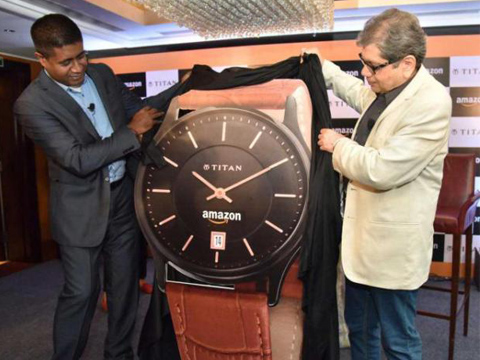 India’s largest watchmaker Titan will tap into e-commerce giant Amazon’s global selling programme to begin shipping its products to customers in the US, even as it reinvents its product range locally to boost sagging sales. Titan will join the likes of large Indian brands such as Amul, Fabindia and Manyavar which have ridden on the back of Amazon to sell their products globally. Amazon claims to have over 23,000 Indian sellers who have listed over 63 million products on its global selling platform.

S Ravikant, chief executive officer, watches and accessories, Titan, said, “E-commerce is the fastest growing channel for us and the US already has a mature e-commerce market.” The watchmaker will kick off its business in the US by introducing 500 models under the Titan and Fastrack brand names. The company says it will price its products between $30 and $300, and is looking to establish itself before the year-end holiday sales season. Ravikant said Titan would consider selling leather accessories, eyewear and bags from its many brands in the US in the coming months, but for now the company was only targeting the $12-billion watch market in the country. The US will be the first overseas market for Titan where the company will begin selling online before it goes offline.

Gopal Pillai, director of seller services at Amazon India, said, “We have 65 million products listed by Indian sellers on Amazon’s global marketplace. Brands like Amul are doing very well and some of these sellers are seeing over 100 per cent year-on-year growth in sales on Amazon.com.” For selling in the US, Titan will utilise Amazon’s own fulfilment services. The e-commerce firm will stock its products at its warehouses near buyers. Amazon said it would be able to ship out Titan products to customers in the US within two days and can even offer one-day delivery in metros. While Titan sells its watches in over 30 countries, only about 10 per cent of its annual sales is outside India. The company hopes sales in the US will help drive exports.

In the quarter ended June, Titan saw watch exports grow in Southeast Asia. But sales slowed in the West Asian market, where there is a large Indian diaspora. In the US, Amazon found that consumers were searching for the Titan brand, which prompted both firms to partner. Ravikant did not comment on the possibility of selling jewellery, the business that drives maximum revenues for Titan in India, to customers in the US. “The US offline market is very big and would require big pockets to enter. Amazon does that for us, that’s the value proposition,” he said. In the 1990s, Titan had explored selling in Europe by working with distributors in more than 12 countries but had to withdraw in 2007 after sustained losses and failure to create a dent in the market.