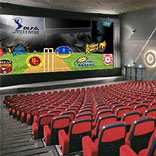 Another successful season of the IPL has come to an end and retailers across the board are looking back at the benefits it has reaped out of it. Multiplex owners are also on the list.

IPL just like last year was brought to the theatres this year also. However, this time around 550 screens across the country were ready to telecast the IPL matches live. The matches were screened in high definition with the advantage of a commercial break free experience. These matches were screened both in 3D and in 2D. UFO Moviez, the digital satellite cinema network, had entered into an alliance with the various multiplexes and single screen theatres across the country for bringing the matches live to people on the big screen. Fans who could not lay their hands on tickets to go to the stadiums, stormed theatre halls in big numbers to watch the match on the big screen.

The idea of screening the matches in theatres has proved to be a roaring one. It is expected that a multiplex chain would have pocketed about Rs 3- 5 lakh per match. However, the last leg of the IPL saw an occupancy rate of about 80-90 per cent giving a good deal of business to the theatre operators. In addition, the final of the tournament was completely sold out at almost all of the venues. For Fame Cinemas also the business was good following which they increased their number of screens to display the final. As a result, they witnessed an occupancy rate of nearly cent per cent. Big Cinemas also reached great numbers for business on the final.

The aim of the multiplex owners was not just to screen the match, but also offer them a wholesome experience. A carnival like feel was brought to the cinema halls. IPL merchandise was sold, cheerleaders were brought in, music and live brands were played, and multi-cuisine food kiosks were also set up. Some owners also juggled with their menus to bring out more offering for the cricket fans. The multiplex owners were said to cash in to a great extent on the revenues from the sale of food and beverages.

The screening of the IPL has been beneficial for the multiplex owners throughout the country. We can expect the next year to bring in innovation to this format of viewing the IPL.