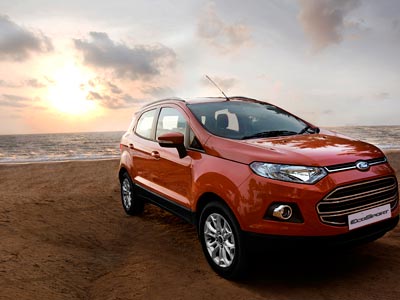 Ford EcoSport celebrated the 100,000 sales milestone in domestic wholesales and exports combined.
NEW DELHI, India, 19 August 2014 - Setting yet another benchmark of success, Ford India's most awarded urban SUV, Ford EcoSport, celebrated the 100,000 sales milestone in domestic wholesales and exports combined.
With more than 60,000 proud owners in India till date, Ford EcoSport has continued to receive overwhelming response from customers due to its robust drive dynamics, exemplary performance, smart technology and compelling value proposition.
"The 100,000 milestone is indeed special to all of us at Ford and further demonstrates the faith customers have in the product," said Vinay Piparsania, executive director for Marketing, Sales and Service, Ford India.  "The demand for Ford EcoSport continues to be extremely strong. We have diligently worked with our suppliers to significantly reduce the waiting period for most variants of the Ford EcoSport to meet this demand. With improved availability, we are also planning to introduce a third shift at our Chennai plant to ensure that the Ford EcoSport is available across our showrooms, ahead of the upcoming festive season."
The urban SUV is being exported to various markets world-over, including South Africa, Taiwan, Australia and several European countries, where it has received an equally enthusiastic response.
The acceptance of Chennai-made Ford EcoSport across the globe validates and further strengthens Ford India's credentials as a world-class manufacturing hub.
With more than 30 prestigious auto awards, Ford EcoSport is the most awarded car ever in India and continues to receive an enthusiastic response from customers in India.
FORD
sales
suv
auto cars
Trending Article