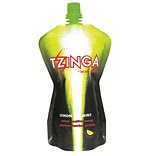 Hector Beverages, a pioneer in the Indian Functional Beverages industry, recently announced the launch of their newest product - Tzinga Energy Drink. Tzinga is made with a powerful blend of ingredients to avoid those energy slumps we know all too well, and keep mind and body performing at their best.

"Young urban Indians are intrigued by energy drinks", says CEO N eeraj Kakkar, "but we consistently hear them say that they are turned off by the medicinal taste and high price of every energy drinks out there. Tzinga solves both of these problems." CFO James Nuttall says the secret of Tzinga's great taste is natural lemon juice and mint flavour from premier global ingredient suppliers, "the lemon-mint combination does a great job of masking the guarana, ginseng, and other energy ingredients which can have an unpleasant taste."