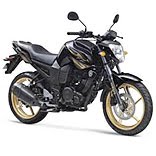 Riding on the grand success of its muscular and hottest-looking bikes of the FZ Series – FZ, FZ-S and Fazer, India Yamaha Motor has announced the launch of FZ Series Limited Edition bikes under the Midnight Special version. Since the launch of FZ series in 2008, these bikes have gained immense popularity amongst youngsters.
As the version name ‘Midnight Special’ suggests, the bikes will be available in an all black color concept with golden alloy wheel highlighting the exclusive looks of the machines.

Speaking on the FZ Series Limited Edition bikes launch, Mr. Pankaj Dubey, National Business Head, India Yamaha Motor said, “Keeping in mind the festive season, we are launching Limited Edition FZ Series bikes and are confident that these too will be an instant hit among the biking enthusiasts. We have kept the essence of FZ series bikes intact while altering the aesthetics to exemplify the masculine feeling these tough machines are known for. The rich & sporty graphics will take the macho image to its next level.”