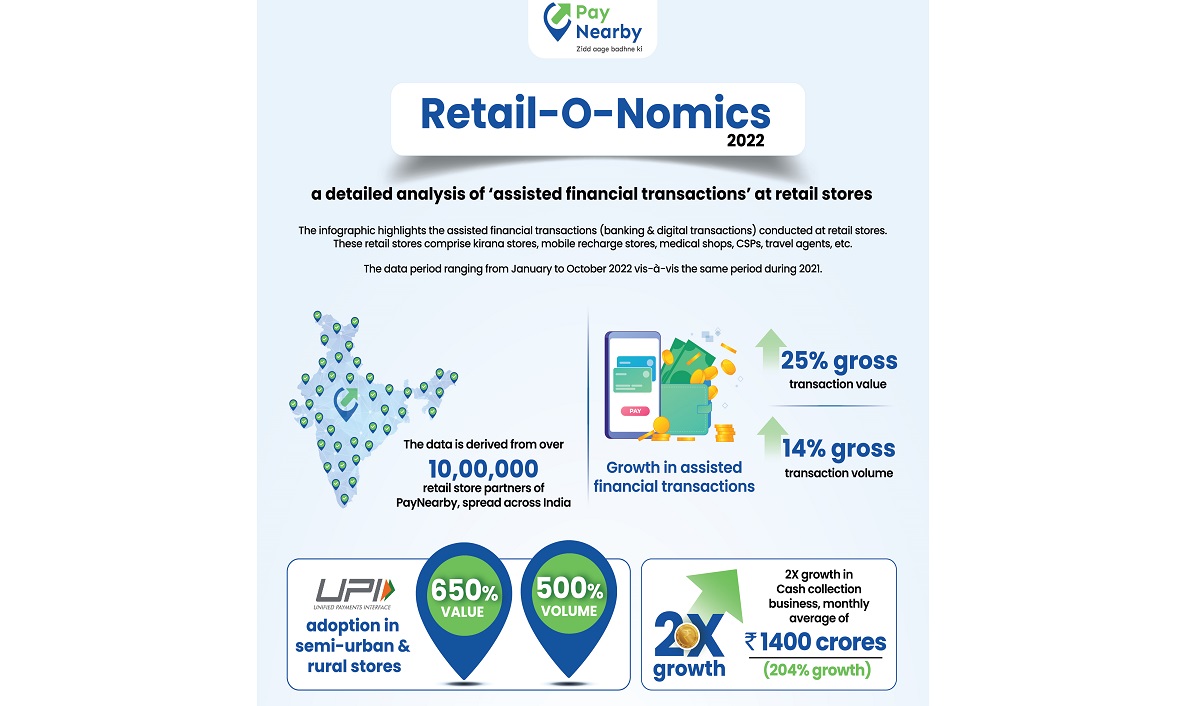 There has been a growth of 25 percent and 14 percent in value and volume respectively, in assisted financial transactions across semi-urban and rural retail counters in India in 2022. This indicates a behavioral shift in consumers in these regions, with more citizens adopting assisted digital means for their banking and lifestyle requirements and getting incorporated into the formal economy.

As per the report, Unified Payments Interface (UPI) transactions saw a whopping 650 percent and 500 percent increase in value and volume across PayNearby retail counters, representing the growing adoption of UPI beyond Tier II regions in the country. This further highlights the pivotal role UPI can play in promoting digital financial inclusion.

The insight was shared as part of the second edition of the pan-India report titled ‘Retail-O-Nomics’, released by PayNearby.

In a key insight, the report states that the mPOS business has seen more than 100 percent growth, along with a 25 percent increase in demand for micro ATMs and mPOS instruments. The upswing in demand for digital payment options at retail outlets underlines the critical role played by small retail stores in bridging the infrastructure gap and driving financial inclusion at the last mile.

This growth figure shows the growing role played by this portable digital device in ensuring easy accessibility of bank accounts while helping merchants use cash-at-store more effectively and augment their income. However, there has been a slight dip in the average cash withdrawal per transaction from Rs 2,620 in 2021 to Rs 2,595 in 2022.

As per the report, semi-urban and rural India were equal participants in this double-digit growth in assisted financial transactions, and the rate of adoption was comparable between urban and rural underserved demographics.

The report also indicates a sharp growth of over 200 percent in the cash collection business (including EMIs) with a monthly average of Rs 1,400 crores, indicating demand for lending and other financing solutions, bouncing back to the pre-pandemic levels. Increased demand was witnessed across most cash collection processes, including collection from logistics and e-commerce companies, which saw a leap of over 89 percent in volumes. Insurance premiums at retail stores, too, saw a massive 370 percent in growth and a 365 percent increase in customers during the survey time period.

“The findings in the report are inspiring and emphasize the fact that Bharat is gearing up to walk hand-in-hand with India. Bharat is aspirational, and the increased offtake of green shoot services like assisted commerce, OTT subscription, and micro-lending validates our commitment to make these services easily available at a store nearby,” said Anand Kumar Bajaj, Founder, MD, and CEO, PayNearby.

He further added, “We have serviced close to Rs 70,000 crores of digital services in the first 10 months of this calendar year and the steady growth of cash withdrawal business, together with the fast track adoption of some of these green shoot services indicates a steady recovery of our economy post the devastating impact of the pandemic. We will continue to strengthen our efforts to simplify high-end technology so that most services can be democratized and made available to all through our well-entrenched Distribution-as-a-Service network. This is not only a great income generator for the merchant, but also helps build the nation grounds up and bridge the gap between Bharat and India.” 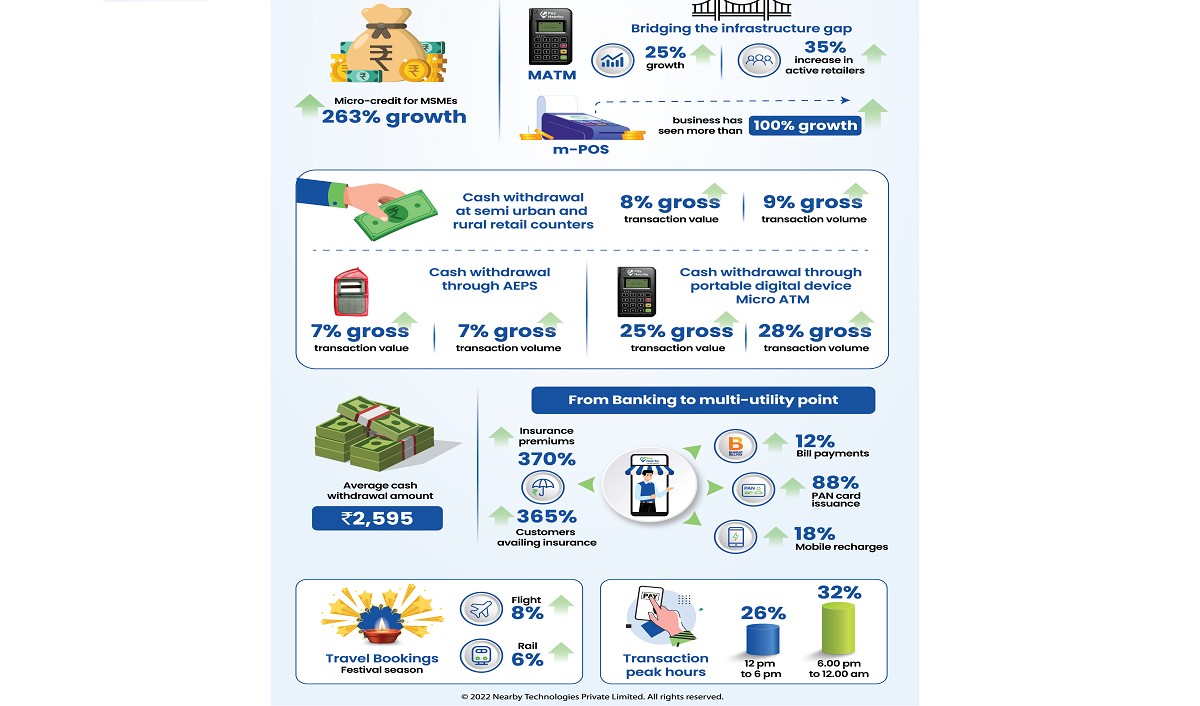 Subscription-based digital services, such as OTTs, online education, and online gaming have also seen positive growth. Even though the numbers are small, it validates a latent demand for such services and the growing affinity for digital products in a post-pandemic Bharat.

The bill payments service at local stores witnessed an increase of 12 percent in value and 10 percent in volume. Mobile recharges grew by 18 percent over last year. Travel bookings saw a rise of 8 percent in flight and 6 percent in rail bookings this festival season, compared to the same period last year, driven largely by visiting friends and family, traveling to their natives for the festival.

The report further highlights an 88 percent uptick in Pan Card issuance quarter on quarter. All of these indicate that the local Kirana store has evolved into a multi-utility point for consumers for meeting most of their financial and digital needs.

Micro-credit for MSMEs, also saw a growth of 263 percent during this period; indicating a huge latent demand for viable credit in this segment that needs to be addressed for India to transition to the next stage of development.

Around 32 percent of the banking transactions were registered during the non-banking hours between 6.00 pm to 12.00 am. This underlines the crucial role retail outlets play in serving the masses with their banking and digital needs.