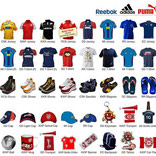 Rage of the IPL
The Indian Premier league (IPL) has created a rage in the country and fans are going all out to offer their full support to their respective home teams. The sales of the merchandise associated with the IPL teams like jerseys, caps, slippers, tattoos, key chains and many more items have been quite bullish. The concept is an instant hit. With the sales growing and a large audience to cater to, merchandise is not only available in stores but also on online portals followed by the launch of jerseys for women and children.

Football fever
Merchandise supporting various football teams across the globe is also a favourite amongst fans who are ardent football lovers. Jerseys and bags for teams like Manchester United, Arsenal FC, Liverpool FC, Chelsea FC, Bayern Munich and Real Madrid FC have always been in high demand. Amongst all of these, Manchester United jerseys move off the shelves the fastest.

New concept
A very recent concept besides sports merchandise is that of ‘Sports Jewellery’. Sports jewellery industry is valued at over $2 billion worldwide. India is relatively new in this sphere. A Mumbai-based diamond company, Shrenuj has recently formed a joint venture with Israel's SWA Trading, for developing and marketing sports diamond jewellery for soccer lovers. According to the JV, Shrenuj will make special diamond cuts to resemble the logo of the individual club such as InterMilan, Manchester United, Real Madrid and Barcelona and set in jewellery items such as medals, trophies, rings, pendants, and bracelets for the respective clubs.

An association of sports and jewellery is something which was earlier unheard of. Jewellery retailers are exploring the various possibilities to be a part of national obsessions like cricket in India as well as other sports. Gitanjali’s association with the IPL began in its inaugural year and expanded with IPL 2. Both the years it designed and crafted trophies, crowns and gold plated helmets. Gitanjali is also currently exploring opportunities for IPL 3. Besides the IPL, Gitanjali has also partnered with ICL and the felicitation of the members of the Indian team on the occasion of the 25th anniversary of their historic triumph at the cricket World Cup in 1983. Mehul Choksi, Chairman, Gitanjali Group says, “Gitanjali Group would like to be at the heart of young India. Cricket in India is more than a sport. It has a cult status, we are glad to be associated with this magnificent game that is the singular most unifying force in a diverse country like India." Besides cricket, Gitanjali is also associated with sponsoring horse racing and teaming up for motor racing related events.

Sales
The sales for sports merchandise is on a high and selling like hot cakes. Despite the price factor, which is on the higher side, fans are not backing out from making the purchases to show their support. The jerseys range between Rs 2000 – Rs 4000 price range. Retailers have realised the potential sports have to lure buyers and are therefore catching up fast on the concept. Customising is another key factor that has further led to the increase in the number of sales of jerseys as you can now get the number and name of your favourite player on your jerseys. The IPL teams are looking at selling merchandise worth over Rs 35-40 crore this year.

Sports licensing giving impetus
Sports licensing has come across as a great business opportunity for Indian retailers. The significant growth of sports licensing has been the driving force for football and cricket merchandise. All the leading sports merchandise retailers have been given licensing rights by the respective teams to work on developing merchandise for them. Utkarsh Singh, Head- Business Development for Rajasthan Royals IPL team says, “We are considering the entire gamut of possibilities and are just not restricted to three to five categories. We have considered licensing in animation, gaming, movies, music, clothing, accessories and other innovative licensing.”

The way forward
The ride for the sports merchandise industry seems to be extensive yet smooth. With a few considerations, the industry is set to move to greater heights.