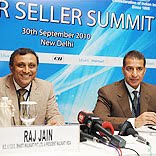 On the sidelines of the first international buyer-seller summit that was organised in Delhi last week, Retailer got a chance to speak to industry giants, Mr Rajan Bharti Mittal, chairman of Bharti-Wal-Mart and Mr Raj Jain, president, Wal-Mart India about the future plans of Wal-Mart-Bharti, their Joint Venture  company.

Here, revealing their plans, they emphasised on the importance of unlocking India’s potential to become a sourcing hub for countries in which Wal-Mart stores are present so that India becomes a global destination for sourcing of quality products at competitive prices as this would not only benefit the Indian economy but also its people who will constantly save money and feel better. Here are the excerpts of the chat..

Mr Rajan Bharti Mittal (RM) & Raj Jain (RJ) : Wal-Mart-Bharti, the Joint Venture Company wants an end to 25 per cent limit on sourcing from whole group companies. The government should allow FDI-backed wholesale firms to sell more than 25 per cent of their total turnover to a group retailer. And, relaxation of norm is just half the job done. We have written to the finance ministry in this regard. However, Bharti-group has a wholly-owned Bharti Retail which runs the Easyday stores across the country and the latest relaxation of norms will result in increased business. Off take will obviously go up.

The government has relaxed FDI norm thereby lifting restriction that required retailers to source products from FDI-backed group wholesale firms only for internal use, hence Bharti Retail can now sell products sourced from Bharti-Wal-Mart. The latest relaxation of norms will result in increased business and off take will obviously go up as other companies will also buy from us. Opening of retail FDI will be a game changer. The government must realise that the back-end can happen only if the front-end is open.

Retailer: The government has suggested that retail giants chains should hire 50 per cent of their employees from rural areas and at least 50 per cent of the money invested should be used to create back-end infrastructure such as cold chain etc? What’s your opinion on this?


RJ: Well, in Punjab, where we have our outlets, we are hiring rural youth to give them employment instead of recruiting the employees from big cities and metros. On infrastructure front, we are providing all possible help to farmers of the state with whom we have made our contact.

Retailer: Do you expect further FDI relaxation from the government?

RM: We have asked the government to allow 49 per cent FDI in multi-brand retail to begin with. Let’s see, how it helps the economy.

Retailer: What are Bharti-Wal-Mart’s present and future plans across the country?

RJ: At present, we have three cash and carry stores in Amritsar, Ludhiana and Jalandhar and the company is planning to enter Madhya Pradesh and Rajasthan by the end of this year. The company has plans to open 12 to 15 cash-and-carry branded format outlets—Best Price Modern Wholesale—by next two to three years. We are also slowly looking at entering other states like Maharashtra, Andhra Pradesh, and Karnataka, and later in all the metro cities. However, the company has no plans to enter Delhi in the near future. The number is much more than what was originally planned at the time we had set up this joint venture.