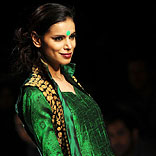 The Indian designer wear industry, according to a recent study by ASSOCHAM, is growing at a compounded annual growth rate (CAGR) of about 40 per cent. In the report titled ‘Trends in Indian Designer Wear Industry’, the booming industry in India is likely to cross the Rs 11,000 crore mark by 2020.

The industry, which is currently pegged at Rs 720 crore, is seeing a growing popularity of boutiques selling designer, local wear showcasing finished and ready-to-stitch garments and trendy dresses.
“The designer wear industry in India is driven by higher disposable incomes leading to rising purchasing power, emergence of mall culture, changing sense of style, dressing and growing fashion consciousness among urbanites,” said D S Rawat, Secretary General, ASSOCHAM.
Apart from this, the Indian film industry and the West also have a huge influence on the ever-evolving fashion scenario in India.
Eying a huge consumer base, premiere foreign brands dealing in segments like designer wear and lifestyle consumer products are also making a beeline to enter the profitable Indian market amid fears of another economic slump in the United States and a debt crisis in the European markets.
“Currently, India’s share in the global designer wear industry is a minimal 0.32 per cent, but is likely to reach about 1.7 per cent by 2020,” said Rawat. The global designer wear industry is currently poised at over Rs 2.2 lakh crore and likely to cross Rs 6.1 lakh crore mark by the end of this decade, the report says.
Suggestions
The Chamber has called for removal of infrastructural and various logistical bottlenecks that are proving to be a bane for growth and development of the designer wear segment in India.
ASSOCHAM has suggested the government to sponsor exchange programmes between domestic and international fashion institutes to enhance Indian designers’ potential and bring India on the global fashion map, making it a prominent fashion capital of the world.
According to a recent ASSOCHAM survey, nearly 35 per cent of male and over half of female shoppers in urban India prefer shopping at retail outlets, which are one-stop shopping destinations, as one can find almost all the leading local and international brands under one roof. Besides, nearly 40 per cent of working couples prefer buying designer wear for their kids.
The loopholes
Even though the industry is regarded as a sunshine segment for the overall apparel market, it is grappling with issues like lack of strong brands and financing options for budding designers.
But what hinders this growth is the plagiarism as designs get copied and thus more and more fashion designers have started seeking copyright protection and are getting their designs registered.
Industry Speak
Indian designers feel that the industry is still in a nascent stage, and though the numbers look unachievable, a few steps, if taken, would help the industry grow. Puja Nayyar, a well-renowned fashion designer, says, “Though the numbers in the report sound juvenile, the growth is surely slated as more and more people in India are now taking the fashion industry seriously, which also helps us in performing and delivering in a better way. Moreover, the changing trends are now becoming important for people and they are going out and buying stuff. A bright future can be expected if the industry keeps on maturing at this pace.”
Jattinn Kochhar, who has been in industry for almost 20 years now, says, “The strong media exposure has surely created awareness about our industry and fashion per se among people, but Indians are still not coming out and paying for designer wear. The fake still dominates the market, which, in my opinion, should go for the industry’s good.”
The two unanimously think that government intervention is important for the industry to flourish.
“The government needs to give it an industry status and also work upon it and reduce taxes. High taxes make the clothing more expensive, thus keeping customers at bay. Government support is important for us,” adds Kochhar.
Stay on top – Get the daily news from Indian Retailer in your inbox
Also Worth Reading
Explore By Industry