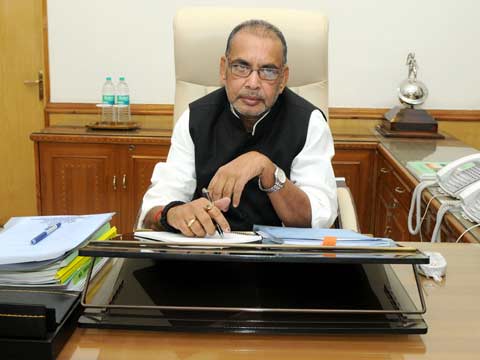 NEW DELHI: Amid fears of spike in onion prices during the upcoming festive season, Agriculture Minister Radha Mohan Singh on Friday said the government will take all measures to ensure prices of onion do not touch the Rs 80-100 per kg level again.

Due to late monsoon, arrival of kharif (summer) onion crops would be delayed by a month in key growing areas of Maharashtra, Rajasthan and Madhya Pradesh, threatening to push up prices in the late September and October.

"Delhi people know that the earlier government used to be scared when onion prices skyrocketed to Rs 80-100 per kg. Now, prices are ruling at Rs 25-30 per kg and the government is awake and will not allow prices to rise," Singh told reporters on the sidelines of a CII event on the dairy sector.

The government will take all measures to ensure prices of onion do not reach the level of Rs 80-100 per kg and cause pain to consumers, he said.

"I would like to ask from people what was onion price in the last year and what it is today. The government is taking measures to control prices of all fruits and vegetables. ...By all means, we will not allow onion prices to reach the level that used to be in Congress-led government regime," he said.

In order to avoid spike in onion prices during late September and October, the government recently removed the requirement of mandatory fumigation for imported onion to boost supply of the commodity and check price rise.

The removal of this requirement would reduce the time taken for imports of onion into the country.

The government has also waived off the four times penal fees on account of non-compliance of the fumigation norms.

The domestic demand during the lean period from June to November is met through stored rabi (winter) and fresh kharif (summer) produce.

As per official data, onion prices are at present stable in the range of Rs 20-30 kg in most part of the country.

Onion is available at Rs 30 per kg in Delhi, Rs 32 per kg in Mumbai and Rs 25 per kg in Chennai and Kolkata.