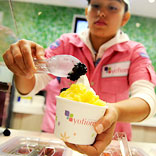 Frozen yogurts are appealing to the Indian customers like never before, attracting more players to the market, both domestic and international. In past one year, India has seen an insurgence of frozen yogurt brands, including Yogurtry of the UK, Berrylite of Singapore, US-based Red Mango and Cravingz, a domestic player from Ahmedabad.
“The concept of frozen yogurt has grown leaps and bounds forward from its conventional being.  There is a major transformation that is happening, and people have started preferring frozen yogurt over the not-so-healthy, traditional desserts such as ice-creams and sweets,” avers Rahul Kumar, CEO and Principal Founder, Red Mango India. Red Mango, a global brand present in over 20 countries and 168 cities, recently entered the Indian market with its flagship store at Ambience Mall, Vasant Kunj, New Delhi.


Health First
The fro-yo fever is rising every day, especially among the health conscious Indians with a sweet tooth. Frozen yogurts have emerged as a healthy option as compared to ice creams and sweet meat, which have dominated the Indian market so far. “Indian consumers are quite receptive towards frozen yogurt. With the growing trend of health consciousness, the young urbane Indian generation simply adores frozen yogurt. And now the popularity of frozen yogurt is even outreaching to tier II cities, as there is a large chunk of consumers in those areas, who aspire to remain fit by consuming all healthy food. Frozen yogurt, which is actually a complete meal rather than just a dessert, is gaining popularity with the growing consumer education towards the health/wholesome nutrient value of yogurt,“ says GS Bhalla, Founder & CEO, Cocoberry. Cocoberry is the homegrown pioneer in frozen yogurt business in India.
“Frozen yogurt is low on fat, sweet and calories. It is a good mix of health and taste. Unlike traditional desserts, frozen yogurt encapsulates right nutritional value, which can be a good alternative to a complete meal. It also enhances one’s immune system,” adds Bhalla.
In fact, the international players are also surprised at the customer response to this product. “We are receiving fantastic response from Indian customers,” says Marc Ng, CEO, Berrylite Pte Ltd. Berrylite plans to enter the Indian market this year.


Indian Flavours
Indian customers always like to go for tried and tested ‘desi’ flavours in whatever they eat. Keeping this in mind, the players are working and indulging into R&D to introduce the right flavours. “Understanding the taste is a lengthy process and over the next few years, we will analyse this part of the aspect. We have introduced six flavours in the Indian market including Original Cinnamon, Madagascar Vanilla, Blueberry, Sonoma Strawberry and Ghirardelli Chocolate,” informs Kumar.
Players, in order to further penetrate into the market, are also offering a wide variety of India specific flavours apart from their international flavours.


What’s in Store
As the craze among Indians for fro-yo grows, players plan to reach out to masses by making investments in growing their outlet base. With the new outlets, the companies will be eyeing tier II and tier III cities besides the metros. “After our first flagship store, we plan to open around 15 outlets this year and close to 200-250 stores in the next five years. We plan to invest close to Rs 15-20 crore in the Indian market for Red Mango. Initially we are targeting the urban metros and from there on, we will be interested in moving into the tier II and III cities as well,” Kumar says.
“As the concept has gained substantial mindshare across metros and started gaining share across tier II cities, we plan to have over 100 outlets, up from our existing 32, in 20 cities in India by the end of this year,” adds Bhalla.
Berrylite, meanwhile, plans to open 150 stores across the country in a franchisee format. “We have three formats for our stores – 150 sq ft, 400 sq ft and 700 sq ft,” says Marc Ng.


Market and Competition
The Indian market for frozen yogurt, though in a nascent stage, is all set to make it big in the coming years. Though the competition is getting tougher, the players are taking it positively and concentrating on strengthening themselves.
Talking about competition, Bhalla says, “We consider competitors as our industry friends, who help serve the emerging demand of frozen yogurt in the market and help educating customers. The market only grows as new players enter. We are and will continue to remain the pioneer and market leader in frozen yogurt, now and in the future. Our product range is the widest in the market and you can make out just by visiting our Facebook fan page that we have the largest fan base (3,67,000 fans) in the world of any global frozen yogurt brand.” Kumar views that it is time to fill the void in the market for healthy alternative meal. “We are here to treat India to authentic frozen yogurt, which is not just delicious and tasty but has a lot of health attributes as well. The health and wellness segment in the F&B sector is growing at 20 per cent year-on-year,” sums up Kumar.