Brand India has taken a hit in past 2-3 years, says Martin Sorrell 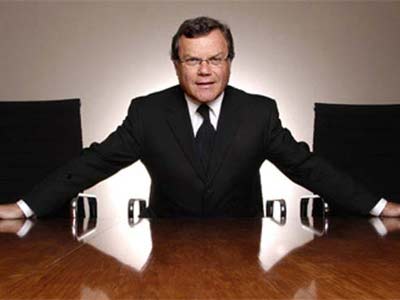 MUMBAI: Renowned British ad-man Martin Sorrell, the owner of WPP Group that controls over 40 per cent of the domestic ad market, today said 'Brand India' has suffered due to events of the past 2-3 years, and stressed on the need to correct the blurred image.

The billionaire businessman said FDI inflows play a key role in shaping a country's brand image, comments which come in the backdrop of the new Government taking proactive steps to invite overseas investors in a range of sectors.

"I think there are some challenges facing Brand India as a result of what has been happening here in the past 2-3 years," he told reporters here.

The Chief Executive of WPP Group, one of the largest advertising firms in the world, however, didn't elaborate on what went wrong in the last 2-3 years.

Citing the example of China, which has benefited immensely because of its strong image abroad, the adman said there is a direct co-relation between the foreign direct investment inflows and brand image perceptions of a country.

"There is a direct co-relation between a strong country brand and strong FDI inflows."He pinned hopes on the Narendra Modi Government to deliver on promises it made in run up to the elections. "I think the Prime Minister has already indicated a willingness to think about those issues and do something about them."

Sorrell, who was knighted in 2000, said there are a few things within India which he would like to see changed and specifically pointed out to stark inequalities on the income distribution front which he termed a big "downside".

"You do see the difference in living standards, the vast differences that exist. That does worry me and this is a marked difference than China. China can manage that, you can argue rightly or wrongly, but they have managed it in a way from a practical point of view much more perfectly."

The advertising guru said the rising middle-class will be the engine of growth in the years to come here.

On Modi's victory, Sorrell said the people have high hopes from him and underscored the need for the PM to deliver otherwise disappointment will set in.

"Of course, expectations are being built up and therefore those expectations will have to be fulfilled, otherwise people will be disappointed."

As for WPP's India business, Sorrell said it touched USD 500 million mark last year for the first time and has been growing at 6-7 per cent per annum.

He, however, rued that India is "under advertised" in comparison to WPP's operations here and China.

WPP holds over 40 per cent of the domestic ad market share with revenue of USD 500 million and employing 14,500 people as against 15 per cent it has in China with a revenue of $1.5 billion and over 16,000-strong workforce, he said.

WPP Group creative agencies in India include industry leaders like O&M and JWT, and smaller ones such as Bates. Sorrell's media buying agency GroupM is the largest in the country.

The British adman stressed on the need for domestic corporates to address the local opportunity first before going out.

He made a succinct criticism on the way Indian businesses operate to drive the point.

"If I was an Indian oligarch, if that is what you call successful entrepreneurs here...I wouldn't mind opportunities here incisively until I have exhausted them before moving abroad," he said.

Sorrell is in Mumbai to launch the Group's debut of top 50 brands among the listed companies here.